Latest Stories » US Hit Taliban ‘Harder Than Ever Before’: Trump 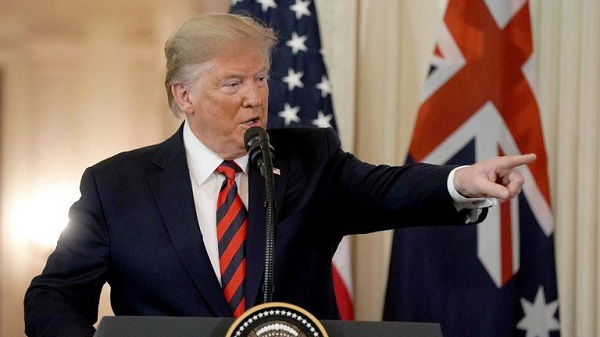 US Hit Taliban ‘Harder Than Ever Before’: Trump

US President Donald Trump on Friday said America has hit the Taliban in Afghanistan “harder” than ever before and claimed that the outfit is now regretting for their action that forced him to end the peace talks with them.

“We have hit the Taliban harder than they have ever been hit in the entire 19 years of war they have been,” Trump told reporters in his Oval Office during a joint press conference with visiting Australian Prime Minister Scott Morrison.

Earlier this month, Trump cancelled a secret meeting with the Taliban and Afghan President Ashraf Ghani at Camp David near Washington after the Taliban claimed responsibility of an attack in Kabul in which an American soldier were among the dead.

He noted that Taliban thought that it was a sign of strength to kill 12 people, wound others.

“One of those 12 people was a young man young soldier from Puerto Rico, from our country. And when I heard that, I said, “I don’t want to deal with them anymore,” Trump said.

It is unclear if the US-Taliban talks are permanently over or only paused. US Secretary of State Mike Pompeo has previously said that the negotiations “were dead for now”.

“I was totally willing to have a meeting. I’ll meet with anybody. I think meetings are good. There’s no such thing as, “Oh gee, and we shouldn’t.” I really believe meetings are good. Worst that happens, it doesn’t work out,” Trump said.

Trump claimed that “absolutely impeccable sources” have informed him that the Taliban are now saying that they “made a mistake” by carrying out the attack in Kabul in which an American soldier and 11 others were killed.

“It’s come back to me through absolutely impeccable sources that they are saying, “Wow. We made a mistake with this guy. They made a mistake”, Trump said.

US President declared that the United States could end the nearly 19-year war in Afghanistan “very quickly” if he chose to do so but that it would involve killing “tens of millions” of people.

Said Trump: “We’ve been very effective in Afghanistan, and if we wanted to do a certain method of war, we would win that very quickly, but many, many, really, tens of millions of people would be killed, and we think it’s unnecessary.”

The cost of America’s military efforts in Afghanistan since 2001 has been about $975 billion. About 2,400 Americans have died in the efforts. And while the Afghan population has not been liberated from terrorism, the country has taken some steps toward democratic government.