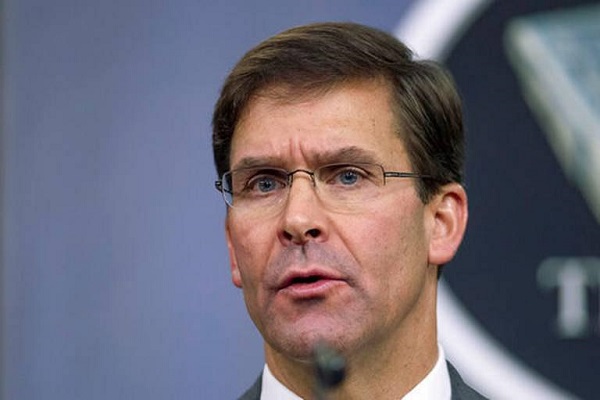 US Holds Talks with European Allies on Afghan Peace Deal

U.S. Defense Secretary Mark Esper on Wednesday began briefing allied officials in Europe on an emerging peace deal with the Taliban, but he cautioned that no final deal has been sealed to end the longest war in American history.

“Negotiations in some ways are still ongoing,” he told reporters traveling with him from Washington a day after he discussed Afghanistan with President Donald Trump.

As per AP report, Esper declined to talk about his meeting with Trump other than to say it covered a range of issues. He said political decisions are pending.

“I don’t want to say anything that gets in front of that or upsets that process,” he said.

The U.S. envoy to Afghanistan said earlier this week that a deal had been reached in principle to end the war, amid concerns by the Afghan government that American forces will leave too quickly and without requiring the Taliban to reduce violence.

Trump on Wednesday restated his intention to end the conflict prompted by the Sept. 11, 2001, attacks.

“We have great warriors there. We have great soldiers, but they are not acting as soldiers, they are acting as policeman, and that’s not their job,” Trump told reporters at the White House. “So, we would like to get at least a big proportion of them home.”

The president added that he’d also like to get “a big portion” of the NATO troops out of Afghanistan. “We’re talking with the Taliban. We’re talking to the government. We’ll see what happens,” he said.

Esper said he would discuss Afghanistan over dinner Wednesday in Stuttgart with NATO Secretary-General Jens Stoltenberg to give the alliance’s civilian leader “a sense of where I think things are” in the push to close a peace deal.

NATO countries have had troops in Afghanistan through the nearly 18-year conflict, and they have agreed that they would coordinate any final withdrawal.

In the in-flight interview, Esper cited “sensitive negotiations” as he declined to talk about specifics, such as the timing of an initial American troop pullout or, more broadly, his level of confidence that the Taliban would live up to their end of any peace agreement.

Among the unanswered questions is whether an agreement with the Taliban will allow for some number of U.S. counterterrorism forces to remain after conventional troops depart. The timing of a Taliban cease-fire also appears in doubt.