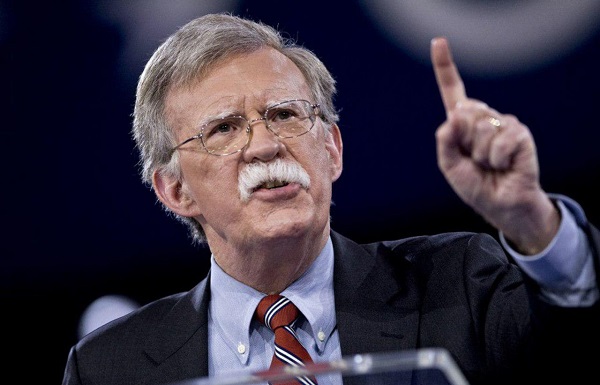 US NSA Bolton Reportedly ‘Sidelined’ By Trump Admin on Afghanistan

According to a report published in The Washinton Post, The United States National Security Adviser, John Bolton is apparently being “sidelined” by the Trump administration on Afghanistan amid discussions of a potential peace deal.

The Washington Post quoted, “As the president’s top aides prepared for a high-stakes meeting on the future of Afghanistan earlier this month, one senior official was not on the original invite list: national security adviser John Bolton,”

“The attendance of the top security aide would normally be critical, but the omission was no mistake, senior U.S. officials said. Bolton, who has long advocated an expansive military presence around the world, has become a staunch internal foe of an emerging peace deal aimed at ending America’s longest war, the officials said.”

There’s been some reporting this year about the Bolton losing some standing with President Donald Trump. The Washington Post said earlier this year Trump was “frustrated” with Bolton on Iran, while the New York Times said Trump “makes no secret” of his dislike of Bolton in private.

Now the Post reveals that Bolton, who’s opposing the peace deal being worked out, has essentially been sidelined on Afghanistan policy, to the point where he was not allowed to view the draft agreement by himself when he requested it.

In a recent standoff, Bolton asked for a copy of the draft agreement the United States is trying to strike with the Taliban. But the U.S. envoy leading the negotiations, Zalmay Khalilzad, denied the request, saying Bolton could read the agreement in the presence of a senior official but not leave with it in hand, U.S. officials said.

One official said the incident infuriated Bolton while another downplayed it, saying the draft was eventually sent to the National Security Council staff.

“At the zenith of his influence, Bolton enabled the president to act on his most aggressive instincts and outmaneuvered other Cabinet officials with less experience in the interagency process. But his tough management style and bellicose worldview have frayed relations with some colleagues”, the post reported.

Bolton’s isolation on Afghanistan became particularly apparent this month when the president’s top officials descended on Trump’s New Jersey golf resort to discuss the peace deal that would be presented to Afghan and Taliban officials in Kabul and Doha, Qatar, U.S. officials said.Bolton was not originally invited out of concern that his team would oppose the agenda and leak the details later, several officials said.

Bolton rejected the allegation, saying in a statement, “I categorically deny leaks by me or anyone authorised to speak to the press. Those alleging such leaks should look in the mirror.” A senior White House official also disputed the leak claims.

Meanwhile, Pentagon and State Department leaders are comfortable with the broad outlines of Khalilzad’s plan, though maintaining a counterterrorism presence will be critical, officials said. On Wednesday, Dunford stressed that all elements of the deal would be “conditions-based.”