Kabul: Minister of Foreign Affairs Mohammad Hanif Atmar met with Chargé d’Affaires of the US Embassy in Kabul Ross Wilson, to discuss security developments in the country and the Afghan peace process. The Foreign Minister spoke about the political-security situation and the recent developments in the Afghan peace process, asserting the call of the Afghan people for an immediate end to the Taliban attacks on cities and the killing of people in different parts of Afghanistan.

Referring to the Islamic Republic of Afghanistan’s propositions to hold two special sessions of the UN Security Council and the UN Human Rights Council on Afghanistan, Atmar called for Washington’s constructive support and cooperation with Kabul in that regard.

During the meeting, Atmar stressed on the importance of dialogue on the establishment of a ceasefire, the resumption of negotiations, and the restoration of lasting peace and stability in Afghanistan as issues to be discussed at the forthcoming UN Security Council session. The Minister of Foreign Affairs called on the UN Human Rights Council to send a fact-finding mission to Afghanistan to investigate human rights abuses and war crimes, and to prosecute violators and perpetrators of war crimes.

Wilson expressed concern over the flagrant human rights violations in Afghanistan, assuring Minister Atmar of his country’s efforts to fulfill the Afghan people’s desire to end the violence and ensure sustainable peace in Afghanistan. The two sides also talked about the agenda, the level of participation, and the issues to be discussed in the upcoming Doha meeting.

This comes even as the United States is evaluating the threat environment around its embassy in Kabul on a daily basis, State Department spokesperson Ned Price said on Tuesday, when asked about a potential further drawdown from the mission amid a Taliban takeover of seven regional capitals in Afghanistan.

“But for right now, we’ve been able to continue those core activities that are important for us to conduct on the ground,” Price said, when asked if the worsening security situation was hampering diplomacy. Taliban insurgents tightened their grip on captured Afghan territory on Tuesday as civilians hid in their homes, and a European Union official said the militants now control 65% of the country after a string of gains as foreign forces pull out.

Pul-e-Khumri, capital of the northern province of Baghlan, fell to the Taliban on Tuesday evening, according to residents who reported Afghan security forces retreating toward the Kelagi desert, home to a large Afghan army base. The United States on April 27 ordered government employees out of its embassy in Kabul if their work could be done elsewhere, citing increasing violence in the city. Price added that the official posture has not changed since then.

“Of course, we do want to minimize the number of employees in Afghanistan whose functions can be performed elsewhere,” Price said. 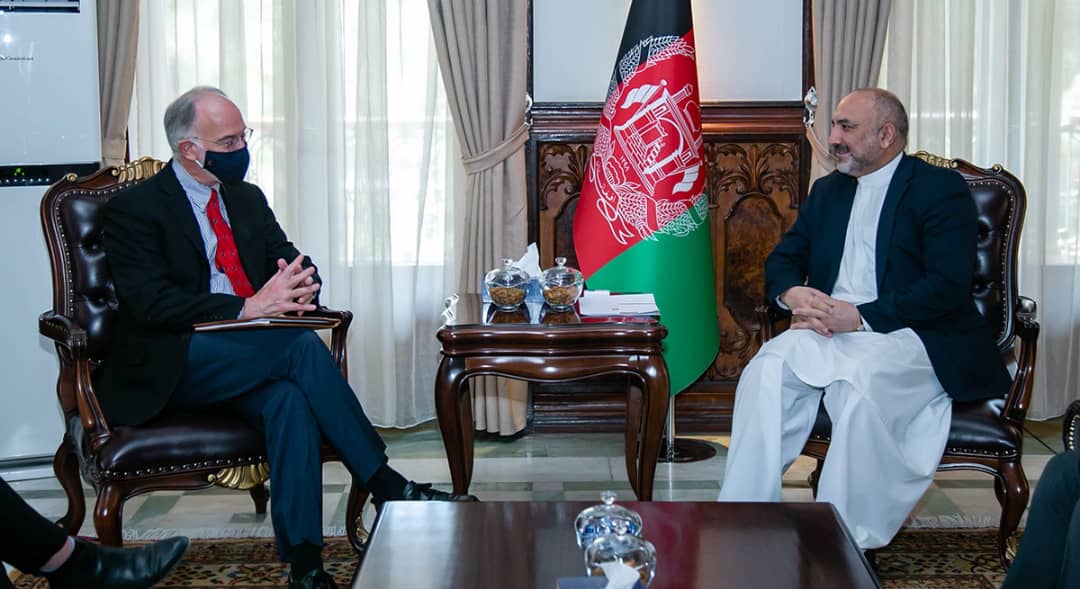 On the relation of withdrawal of troops and deteriorating situation in Afghanistan, Price said, “President Joe Biden had no viable option other than to withdraw U.S. forces from Afghanistan. It was preordained. It’s a deal that this administration probably would not have made, certainly not in all the detail. But it’s the deal that we inherited.”

Taliban forces have swept across much of Afghanistan in the months since Biden announced that he would order U.S. troops to leave the country, culminating in the conquest of several provincial capitals since Friday. Allied officials have described Biden’s decision as “shock therapy,” but Price suggested that it should have surprised no one, given that the Trump administration struck a deal that called for the withdrawal of American forces by May 1.

“The idea that the United States could have maintained a significant military presence in Afghanistan was just not tenable,” Price maintained. “It was not in the cards, because according to that agreement that was negotiated by the United States, not this administration, but the previous one, if our forces remain there in great numbers after May 1, they could have become the targets of violence.”

State Department officials have repeatedly said they intend to maintain their diplomatic footprint in Kabul after the US troop withdrawal is complete. However, a further reduction of personnel at the embassy will quickly fortify concerns that the US is leaving Afghanistan while it descends into a possible civil war, and bring into question the Biden administration’s claim that they will be able to maintain diplomatic support for the Afghan government.

Despite the drawdowns that have already occurred the embassy in Kabul “continues to pursue its full agenda of issues, including support of peace, security, economic, humanitarian, and other assistance, cooperation on counterterrorism and law enforcement, consular services, including especially the Special Immigrant Visa program, and public affairs,” a State Department spokesperson said.

On the other hand, even the Canadian government is making emergency preparations to get diplomats out of Kabul in case the Taliban threatens the embassy. Canadian Defense Minsiter Harjit Sajjan was advised in March on contingency plans for the Canadian Forces to help evacuate Canada’s heavily fortified mission in Kabul, according to a briefing note obtained by the National Post.

Much of the note, acquired through access to information legislation, was redacted before release. But it stresses that most NATO forces are exiting the country in parallel with the U.S. military withdrawal, to be completed by Sept. 1. A small number of Canadian Forces members are based at the mission in Kabul, and the Department of National Defense (DND) is carefully monitoring developments in the country, said Jessica Lamirande, a spokeswoman.

“While the situation is changing rapidly, with the support of on-the-ground planning and liaison assets, DND is developing contingency plans for a range of scenarios in the event that the (government) requests Canadian Forces assistance,” she said. National Defense will not disclose specifics of those strategies for security reasons, said Lamirande.

Meanwhile, even though U.S. airstrikes are helping to blunt Taliban advances across Afghanistan, Pentagon officials warn American air power alone will not be enough to push back the insurgent offensive. For weeks, the United States has been launching “over-the-horizon” strikes from its Al Udeid Air Base in Qatar and from its carrier strike group in the Persian Gulf, hitting Taliban targets with a heavy mix of AC-130 gunships and MQ-9 Reaper drones.

But there have been questions regarding the effectiveness of the strikes, with Taliban officials claiming the group has captured seven provincial capitals over the past five days, and tweeting on Tuesday that an eighth capital, Faizabad, in Afghanistan’s Badakhshan province, fell to them. “We have every confidence that those strikes are hitting what we’re aiming at and are having an effect on the Taliban,” Pentagon press secretary John Kirby told reporters on Tuesday, saying additional strikes have been carried out “in just the last several days.”

Kirby acknowledged U.S. airstrikes alone would not be enough to hold Taliban fighters at bay. “Nobody is suggesting, nobody has suggested here at the Pentagon that airstrikes are a panacea that will solve all the problems, all of the conditions on the ground,” he said. “What we have said is that the Afghan forces have the capability, they have the capacity, they have a numerical advantage,” Kirby added. “It’s really going to come down to the leadership and the will to use those capabilities.”

At the White House on Tuesday, President Joe Biden echoed that call. “They’ve got to want to fight,” he told reporters, adding there will be no reconsideration of the U.S. decision to complete its military withdrawal by August 31. “We spent over a trillion dollars over 20 years. We trained and equipped with modern equipment over 300,000 Afghan forces,” Biden said. “They outnumber the Taliban.” “They have to fight for themselves, fight for their nation,” he said.

U.S. officials argue that fighting back will allow the Afghan government to gain leverage in ongoing negotiations with the Taliban. But despite an announcement earlier this month by Afghan President Ashraf Ghani that the military had launched a new campaign to stabilize the country, there have been few signs of progress on the ground.

US President Joe Biden’s proposed fiscal year 2022 defense budget asks for an additional $300 million to support Afghan government forces in the absence of US troops U.S. officials also point out that the U.S. has already provided the Afghan air force with three refurbished Black Hawk helicopters since the withdrawal began this past May, and that another 34 are on the way. The U.S. is also in the process of purchasing more A-29 Super Tucano strike planes for Afghanistan and continuing to provide maintenance support from afar. Washington, too, has promised to continue to resupply the Afghan security forces with food and equipment, and pay their salaries.

U.S. officials, separately on Tuesday, voiced hope that their efforts may find a way to impress upon Taliban leaders that their current offensive is not in anyone’s interest. “There is room for diplomatic progress to be made,” State Department spokesman Ned Price said, pointing to the presence in Doha of Zalmay Khalilzad, the U.S. special representative for Afghanistan.

“The idea that we don’t have leverage or that the Islamic Republic, the government of Afghanistan doesn’t have leverage, is not the case,” Price told reporters, cautioning, “There are other tools at our disposal that fall short of reintroducing U.S. forces. We have not ruled any of those out.”

For the second day in a row, however, the Pentagon indicated that as the August 31 deadline for the U.S. withdrawal draws closer, U.S. airstrikes, at least, will become less likely. “The drawdown … in many ways, in many facets, is all but complete,” Kirby told Pentagon reporters. “The where and the when in terms of feasibility of these strikes is going to be different and it’s going to decline.”