We do not allow Syrian militants to be sent to Afghanistan: Moscow

Russia has said that they will not allow Syrian militants to be sent to Afghanistan or another country, within the framework of an agreement with Turkey to refrain from military operations in Idlib.

According to the agreement, Turkey has agreed to separate the armed opposition forces from radical militants. The United Nations considers these militants as terrorist groups

Russia’s Foreign Minister Sergei Lavrov said yesterday at a news conference in New York that it would be possible to send these militants to other places. He said that his government would not allow these people to be deployed to Afghanistan or elsewhere. 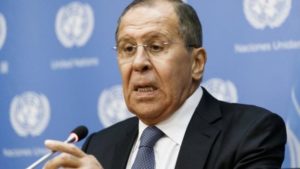 Russia’s foreign minister has said that extremist militants must either “be eradicated or go through a judicial process.”

Russian and Turkish Presidents, Vladimir Putin and Recep Tayyip Erdogan, have agreed to establish a demilitarized zone in the Syrian province of Idlib.

Russia has said that all jihadist and radical forces must leave the demilitarized zone.