President Ashraf Ghani met with Russia’s ambassador to Afghanistan Dmitry Zhirnov and his delegation on Monday, where they discussed regional security and shared messages ahead of Afghanistan’s Independence Day.

Ghani said at the meeting that the “struggle of the Afghan government and people against the Islamic State (IS) and terrorism is an exceptional struggle. Our people have made many sacrifices for the security of the region and the world”.

He added that Afghanistan and Russia have a common vision in the fight against terrorism and that actions taken against IS by the Afghan government “have been comprehensive and fruitful”.

The Afghan government is also taking serious steps against Central Asian terrorist groups, the president said, and added that the issue around drugs was a serious threat to both countries and to the region. 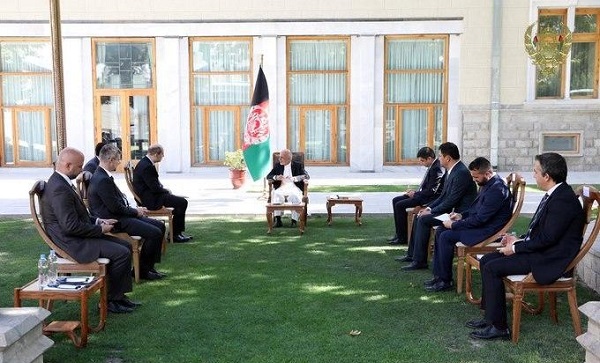 The message from Russia’s President Vladimir Putin was delivered at the meeting, where he congratulated Ghani on Afghanistan’s 101st anniversary of Independence.

Putin, while expressing his satisfaction over friendly relations between the two countries, said that he was “confident that constructive bilateral cooperation in various fields would be further expanded”.

The Russian leader also said that the fight against terrorism and the drug threat was in the “fundamental interests” of the people of both countries and that this action “strengthens regional stability and security”.

Ghani also highlighted the importance of trade relations and development of bilateral cooperation between the two countries.

He also appealed to Putin to support and invest in the Afghan railway system.

Recalling the trade and transit cooperation between Afghanistan and Central Asia, Ghani stressed the importance of Afghanistan’s exports to Russian markets, especially fruits.