President Ghani expressed his happiness at visiting the Kingdom. King Salman also welcomed the president and his delegation to Saudi Arabia courteously.

During the meeting, they reviewed relations between the two countries,ways of developing and strengthening them in various fields and the latest developments in Afghanistan. 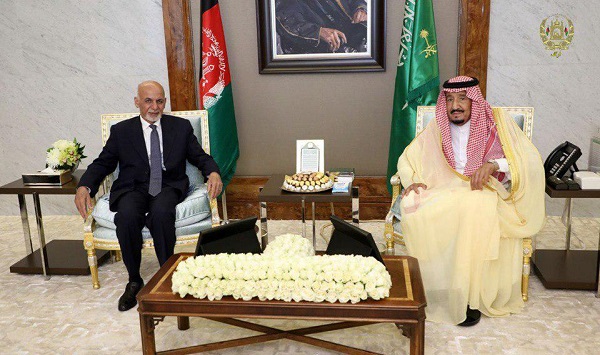 During the meeting, they assessed bilateral relations between the two countries, in addition to a number of issues, including security cooperation in the service of both countries.

During the meeting, President Ghani expressed Afghanistan’s appreciation of the GCC for the efforts exerted to develop joint cooperation in all fields to achieve the common interests of both sides.

Alzayani reiterated the GCC leaders’ keenness on developing relations with Afghanistan, hailing the Afghan Government’s strenuous efforts to combat the scourge of terrorism, consolidate security, stability and peace and push the march of development forward.

Ghani arrived in Jeddah on Saturday, and immediately went to perform Umrah as part of his trip.