Secretary of Iran’s National Security Council Ali Shamkhani told Afghanistan’s acting Foreign Minister Hanif Atmar that “enemies” of the two-nations are trying to disrupt their friendly relations, pointing to the US. presence in the region.

Atmar met Shamkhani on Sunday during his trip to Tehran to sign a comprehensive cooperation document and discuss the treatment of Afghan migrants in the country.

During the meeting, the two sides discussed the comprehensive development of cooperation between Kabul and Tehran in various fields and stressed on the importance of finalizing and signing it as soon as possible.

Shamkhani indicated that signing the “strategic” document will strengthen the historic ties between the two nations and create a basic development framework for future cooperation. 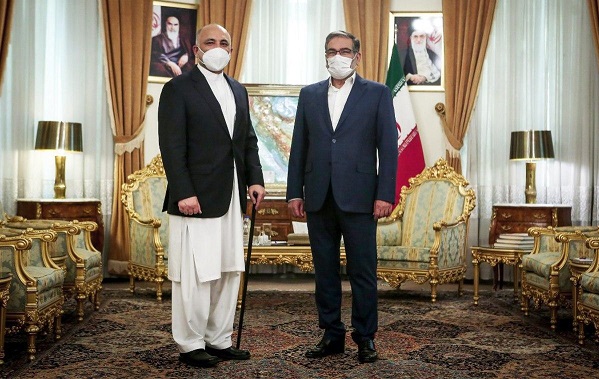 He also extended his regret over the deaths of Afghan refugees and said “fake media campaigns” by some Afghan officials was responsible for the tensions because there was “indisputable” documentation to reject the involvement of Iranian border guards in the Harirud drowning incident.

Atmar, on his part, appreciated Iran’s continuous, all-out and effective support of the Afghan government.

He spoke about legalising the presence of Afghans in Iran and their human rights by giving them electronic identity cards.

Atmar also expressed regret over “unacceptable” measures taken by ill-wishers of Iran and Afghanistan that took advantage of their relations to hurt people’s feelings. He said Afghanistan will underline solving issues through negotiations.

The two sides also exchanged views on Iran’s support for the intra-Afghan peace dialogue and the follow-up and investigation into the two tragic incidents involving the Afghan people.