A Chinese UN envoy has said that Afghanistan’s future arrangements should be broadly representative and inclusive.

“In our view, Afghanistan’s future arrangements should be broadly representative and inclusive, so that all parties, ethnic groups, and religious sects in Afghanistan can participate on equal footing and share state power,” Geng Shuang, China’s deputy permanent representative to the United Nations, told the Security Council meeting on the UN Assistance Mission in Afghanistan (UNAMA).

“The international community should fully respect the will of the Afghan people, and ensure the Afghan-led and Afghan-owned negotiation process,” said the envoy.

“No external forces should be allowed to impose their will or seek gains,” Geng added. 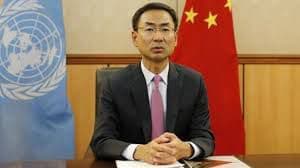 Noting that the Afghan peace and reconciliation process “has now entered a period crucial to its future,” Geng said that “China welcomes the first intra-Afghan negotiations launched in Doha on Sept. 12 and congratulates both sides on reaching an agreement on the rules and procedures for negotiations a few days ago.”

“The next stage of negotiation will feature substantive discussions with a higher level of difficulty. Both sides need to show more political wisdom and resolve. The international community needs to increase its attention and input,” Geng added.