The Ministry of Commerce and Industry has announced that the activities of Islam Qala Customs office have been resumed to transfer export and import cargoes between Iran and Afghanistan.

Fawad Ahmadi, the spokesman of Ministry of Commerce and Industry said on Saturday, that trucks carrying goods from Afghanistan to Iran and vice versa had been stopped for a number of days after a fire broke out in the Islam Qala Customs parking lot in Herat province.

Islam Qala border customs, located 120 km from the city of Herat on the border with Iran, caught fire on Saturday, last week.

The fire lasted for several hours and Iran was asked to help to contain it.

The fire is estimated to have caused millions of dollars in damage. 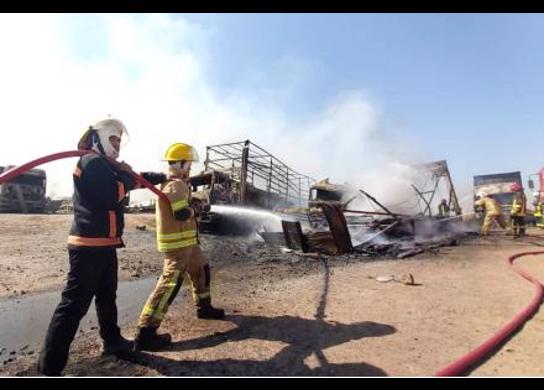 Following the preliminary investigations, the delegation members of the Ministry of Interior said that 12 senior officials Islam Qala Customs office, the Customs Protection Unit, officials from the Norm and Standard Administration, and officials from companies that sampled fuel have been introduced to the Attorney General Office.

In the meantime, the findings of the Afghanistan Chamber of Commerce and Investment Board review show that widespread corruption in customs, mismanagement and lack of facilities to contain the fire have increased the financial damage of the fire.

The House of Representatives is also examining the possibility that the event was “intentional.”

The Herat local administration has denied any formal complaints about the fire, but says it has tried several times to address verbal complaints from traders.

The Ministry of Finance officials insist on further investigations and warn that all those who have been negligent or involved in corruption will be brought to justice.