United States, Europe, and other defenders of the free world need to establish military leverage in order to create the conditions for peaceful political solutions to violence in Afghanistan, argued United Nations diplomat Staffan de Mistura in the most recent episode of Hoover’s Battlegrounds series.

De Mistura has served on twenty-one missions in his over forty years in diplomatic service to the United Nations; He discussed his work as a special envoy in Syria (2014–18), Afghanistan (2010–11), and Iraq (2007–9), and how each country might secure a future of peace and stability.

De Mistura likened the Trump administration’s decision to withdraw troops from Afghanistan to Obama’s Iraq policy a decade ago. 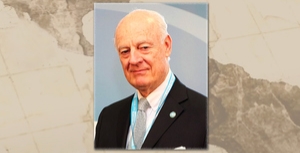 He said that while American leaders should be responsive to their citizens’ wishes to end the war in Afghanistan, an exit strategy should be achieved in a manner that helps secure the gains made by coalition forces.

He advocated that future development aid be contingent upon Kabul’s support for the education and professional growth of Afghan women.

Fundamental change can only be brought about in Afghan society, de Mistura argued, if women, who make up 51 percent of the population, can fully participate in that country’s nascent democracy.