“The Key To Resolve This Conflict Is A Political Agreement”: Defense Secretary Mark Esper

Despite President Donald Trump’s constant reminders that the U.S. military could quickly and decisively win the war in Afghanistan at the cost of millions of innocent lives, the U.S. government is committed to negotiating with the Taliban rather than atomising them.

At Wednesday’s Pentagon news briefing, Defense Secretary Mark Esper was asked by ‘Task and Purpose’, if the U.S. military retains the right to use nuclear weapons against the Taliban. 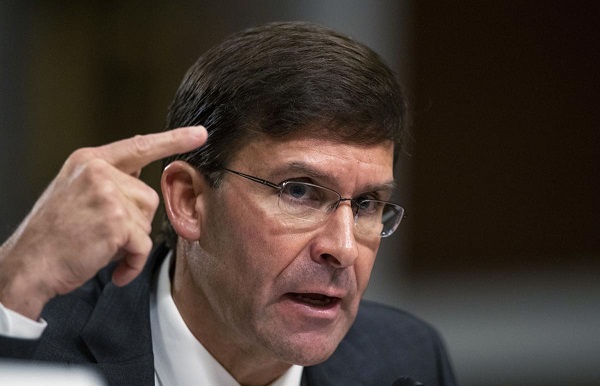 Esper responded by saying, “We reserve the right to keep all options on the table, but, look, clearly we have a plan going forward. The key to resolve this conflict is a political agreement. We’re on that path right now. We’re hopeful that we can reach some type of conclusion that would result in a political agreement that can get us on the right trajectory.”

The U.S. military last employed a nuclear weapon during wartime on Aug. 9, 1945. At the time, the United States was the only nuclear power in the world, eight countries are now members of the nuclear club .

Following Wednesday’s Pentagon news conference, arms control expert Kingston Reif tweeted that the United States has vowed not to use nuclear weapons against countries such as Afghanistan, which do not have nuclear weapons and are meeting their obligations as parties to the Nuclear Nonproliferation Treaty.