The Ministry of Interior (MoI) says the Taliban insurgents carried out 33 different attacks across 16 provinces over the past 24 hours.

So far, the recent surge in violence has reportedly killed six people and wounded 14 others.

Local officials reported five Afghan police died in a single attack in Logar province; it’s unclear if the five police were included in the MoI’s numbers.

“They (Taliban) had 33 terrorist attacks which resulted to the martyrdom of at least six civilians and the injury of fourteen others,” said Nasrat Rahimi, a spokesman for the Ministry of Interior. 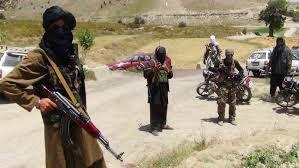 On February 22, a 7-day Reduction in Violence (RIV) plan kicked off that was intended to pave the way for a peace deal negotiated between United States and the Taliban over the past 18 months.

Based on the agreement, the US will fully withdraw its forces over the next 14 months, and that the current force of about 13,000 troops will be reduced to 8,600 within 135 days. Non-US NATO and other coalition forces will also be reduced proportionally over that time.