US General Joseph Votel, commander of U.S. Central Command (CENTCOM) has testified before the Senate Armed Services Committee about military operations in the Middle East.

General Votel answered several rounds of questions regarding the U.S. troop withdrawal from Syria and Afghanistan.

Asked about the main focus of US policy in Afghanistan, Gen. Votel said, “Our main focus in Afghanistan should be on implementing the President’s August 2017 South Asia Strategy which identified that achieving a political reconciliation between the Government of Afghanistan and the Taliban was our principle objective.”

Gen. Votel declared that this approach attempts to put focus back into the political and diplomatic realm and recognizes that pursuing a political settlement is our best chance to bring an end to the long war in Afghanistan. 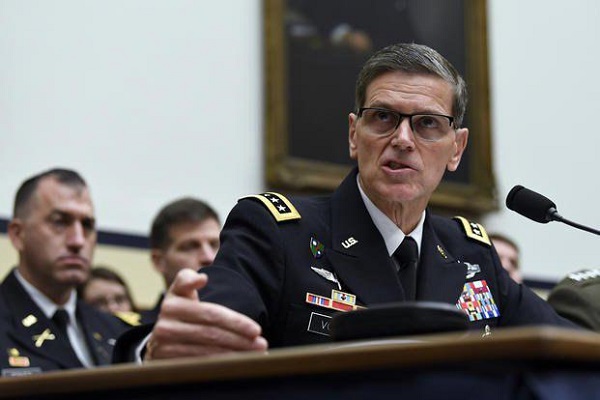 Asked about does Gen. Votel believe a deal can be reached with the Taliban, he said, “I do believe it is possible to achieve a deal with the Taliban and this has been the primary focus of our Special Envoy, Ambassador Zalmay Khalilzad, supported by our military forces and of course the weight of the US Government and the NATO-led Coalition.”

“We knew from the start that this would be a difficult and lengthy endeavor – a fractured Afghan Government; continued enablement of the Taliban by Pakistan; the influence of Iran and Russia; uneven Afghan military performance; spiraling high profile urban attacks; lack of trust between the principal Afghan adversaries; and, emergence of a regionalized branch of the ISIS Caliphate all mitigate against a quick resolution,” he added.