Abdul Ghani Kaka, one of the Members of the Helmand Peace March, passed away due to physical disability at the age of 63. He was the representative of five boys and six girls from Logar province to Helmand’s peace initiative

Hafizullah Stanekzai, nephew of Abdul Ghani and a member of Helmand peace initiative, attributes the cause of his death to physical weakness and inability. According to Mr. Stanekzai, due to last seven months constant exertion, body of Ghani Kaka became fragile and eventually he became ill.

Abdul Ghani’s nephew says that due to being constantly on foot, he sustained eye and foot ache along with back pains. One of the hopes of this member of Helmand caravan was to perform Hajj Umrah (Hajj is one of the five pillars of Islam which is performed over specific days during a designated Islamic month. However, Umrah can be performed at any time). But another big dream of this man was to witness peace in the country. He had delayed his pilgrimage so that he could play a promoting role in bringing peace to his country. Abdul Ghani had said that when his efforts at peace caravan starts to show result, he would lead the journey to perform pilgrimage

According to his nephew, it is clear that Abdul Ghani Kaka could not go to Hajj Umrah, but the Hajj Akbar (big pilgrimage) he made in Afghanistan for peace is the Hajj that is the aspiration of millions of Afghan citizens. 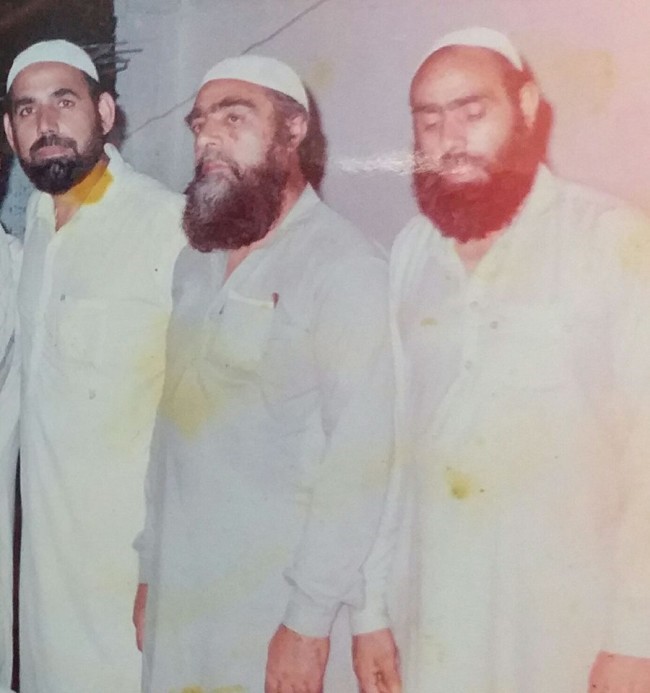 Abdul Ghani Kaka (in the middle), member of Helmand peace convoy, died of physical disability at the age of 63

His Son also Lost His Life in Pursuit of Peace

Abdul Ghani Kaka was the resident of Muhammad Agha district in Logar province. He enlisted his only son to security forces. “Someone who was the apple of his eyes”, said his relatives.

Abdul Ghani had said that “I have only one son, and this son should be dedicated to his land”. Abdul Ghani Kaka’s son died when he was 25 years old in a gunfight with armed opposition in Khost province.

After his son left this world for the other Abdul Ghani himself started his journey. He said that though he didn’t have the ability to join security forces, at least he could sincerely raise a peaceful voice across Afghanistan. That’s why he and 11 others from Logar province joined the peace march initiative seven months ago, when Helmand’s peace march arrived in Kabul, and settled in front of the US embassy.

“As we set down our advocacy tent in front of US embassy in Kabul, Abdul Ghani Kaka made a peace march caravan from Logar which included 6 women and 6 men who came to Kabul and joined us,” said Iqbal Khaybar to Reporterly.

According to Mr. Khybar, after Abdul Ghani Kaka joined the peace convey, he went to Maza-e-Sharif from Salang Pass. Although the members of the Helmand peace march initiative had often asked him not to follow this long road because of his age, he refused to give up saying that: “Our movement must be candidly, so that peace that comes to our country be pure one”.

Iqbal Khybar said that although Abdul Ghani Kaka did not seem sad about the loss of his son but one could feel the pain he was going through. “I know the pain to lose a son and that is why I fight so that we witness peace and no father will ever see the pain I have gone through,” Iqbal Khybar quoted from Abdul Ghani Kaka.

Members of Helmand peace march are currently in Nangarhar. They have traveled to more than 20 provinces and most of the time on foot.

Forty years of war has brought too many challenges in Afghanistan and people have sacrificed everything. In the past four decades, the citizens of this country have grown up from amidst war and instability. Therefore for most of the Afghans, coming of peace seems like an impossible dream.

A crowd which is thirsty of peace, started a peaceful yet an unprecedented journey to show their desire for peace in their country. The journey was initiated from Helmand and it took this passionate crowd to travel 700 km by foot.

Helmand’s peace march was launched by eight young people from the province and little by little along the way, other people joined the journey.

Helmand province, the home of this peace-loving group has been the main source of the Taliban-caused insecurity and hostility as well as narcotics over the past 17 years. The movement of this peace-loving convoy started at the beginning of the current solar year from Lashkargah center of Helmand in southern Afghanistan. In order to reach to capital Kabul, they crossed burning plains, poppy fields, small and big cities and semi-destroyed villages. And it took them 691 km to reach to heart of Afghanistan.

A large part of the route which the peace caravan walked on was under Taliban’s control. “The Taliban do not like to come to the roads, but they came to see the caravan of peace saying that they are also tired of fighting under commands of those who they do not know and have not seen in person,” said a member of the peace march initiative.

After the death of Abdul Ghani Kaka, a member of peace caravan, and many social media users said that the dream of this Helmand March Initiative shouldn’t remain a dream for their grand sons and daughters.

Khalil Pajhwak, a Twitter user wrote on his page: “He {Abdul Ghani Kaka} spent his last months of life for peace and became part of a small group whose dream is to end war and killing. It would be painful if Abdul Ghani’s dream remains a dream for his grandson”.