She has initiated a publication in Helmand province. Apart from house chores, she has been engaged in social and civil activities. Nasima Bari has been Awarded Global Youth Leadership Award in Nepal for her “decade-long journey of social and cultural activities”. Although her work isn’t mirrored much as a social activist from south of Afghanistan, she is still seen among young Afghan Leaders from time to time.

As a courageous journalist her name and photo can be spotted among names of other Afghan journalists at presidential palace citizenship wall. This wall was created two years ago by Farkhunda Zahra Naderi during her tenure as advisor to the president of Afghanistan. Ms Bari has been praised by the Human Rights Commission in Helmand province. As an inspiring Afghan youth and due to her activities as a volunteer, she received an award in Sri Lanka in 2018.

Driving change in southern Afghanistan isn’t an easy task specially for women, but the passion to make a difference and touch lives and inspire people to stand against the odds and do some great work can always help everyone to emerge strong just like Nasima Bari did. Despite limited work environment in the east, her story is filled with inspiration and hardships at the same time. The very story that can narrate a part of life in south of the country. 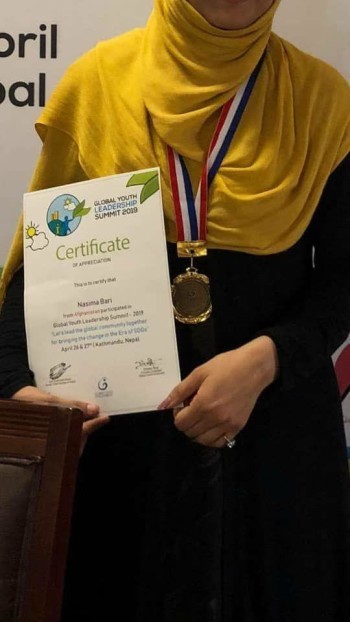 After heading for a journey back to homeland from immigration, she tried to work outside home. She began her journey by working in government and not-for-profit organizations. She also worked as civil activist, writer and journalist at local level. She expanded her activities when she got a closer image of the lives of Afghan women in the south of the country.

“When I saw the lives of Afghan women, a tremendous shift took place in me, I was deeply inspired to work for them. I tried to utilize my abilities to help them because Afghan women are an untapped pool of talent. A small gesture and opportunity can spell a huge difference in their lives and contribute to the release their hidden potentials”, said Nasima Bari. “Inspired with the idea to play a promoting role, I began my journey”, she recalled.

A small but enduring work of hers came to light when she helped a girl who wasn’t allowed to work outside, get her sonnet and poem book published. Ms Bari also assisted another girl student in getting her book printed. It was then that Ms Bari came to know about the eagerness of Helmand’s women in publication and books. This realization triggered the idea of creating a newspaper. She established “Amail Newspaper” so that all girls and women in the province could publish their writings.

She has also contributed as a volunteer with a local Radio station for four years and she still collaborates with the Radio.

Nasima Bari has written two books: one of them is a collection of short stories and the other one narrates the status and problems women face in their life. Ms Bari’s short stories has won the Award of “Second Book of the Year” by Ministry of Information and Culture. Some of her stories are being translated from Dari to English.

Nasima Bari has written two books, one of them is a collection of short stories and the other one narrates the status and problems women face in their life

She works in a not-for-profit organization which helps her allocate an amount of her salary to the Amail publication and the rest to her daily expenses. Ms Bari has a pending story “Balasori” to be published soon.

Nasima Bari was born in a family of 8 members in Kandahar province, but she has spent most of her childhood and adolescence in Pakistan as an immigrant. She is 26 years old and is the  eldest child of the family. She shouldered the responsibility and became the head of her family after her father’s demise. Ms Bari has earned her bachelor’s degree in Science from Pakistan. and obtained her Master’s Degree in Political Science in 2017 through remote/online studies.

Like many Afghan refugees, Nasima Bari also experienced the bitter taste of immigration. She says that her father played a major role in her life and education. Although Ms Bari enjoyed the support of her father and family, but while studying she used to do sewing during the night. “My father was the one who always encouraged us to study and work because he believed that we should be useful to our society and can bring about positive changes in the country,” Ms. Bari told Reporterly.

After returning to Afghanistan, she experienced a different social environment, something which led to the rise in her efforts and firm steps to do social and cultural work unlike the social norms. “In pursuit of such a path, I have faced many challenges from family and friends,” she said. 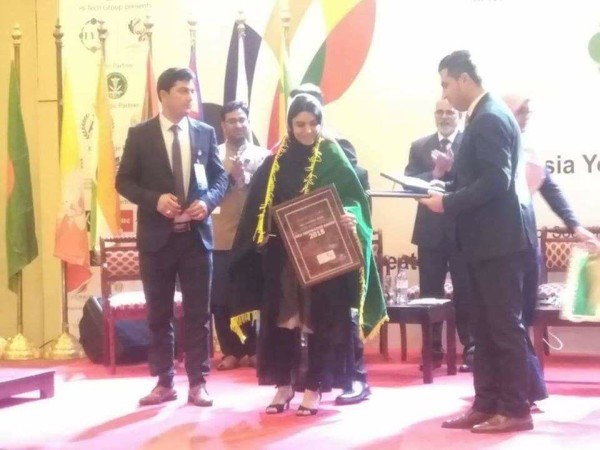 Nasima Bari was born in a family of 8-member in Kandahar province, but she has spent most of her childhood and adolescence in Pakistan as an immigrant

She works with a Radio under a nickname. Her newspaper too, wasn’t launched easily.  But the hardships she faced couldn’t discourage her from the good she was doing and the path she had chosen to walk on. “My journey has not been an easy one, it was filled with ups and downs and I am glad that I was able to find the path to do social work and touch the lives of other women in my province and beyond”, Nasima Bari said.