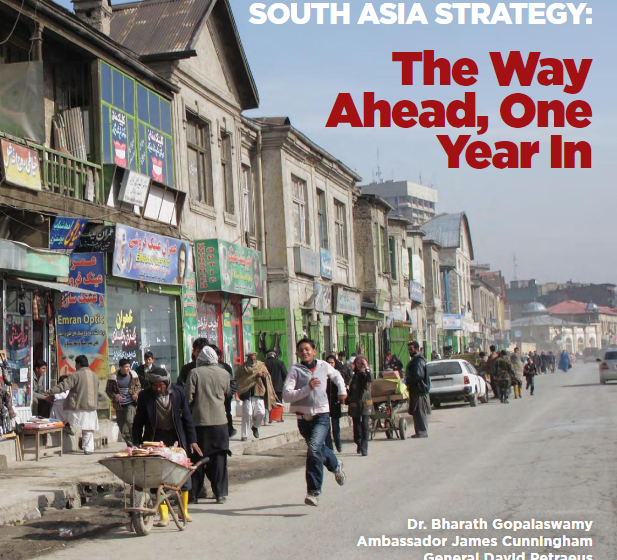 The Atlantic Council’s South Asia Center came up with their review of US President Trump’s South Asia Strategy so far. The report was published in October 2018, much before the Moscow peace talks, or US Special Representative for Afghanistan’s Reconciliation having visited the region two times and meeting up with Taliban representatives.

The review begins with a clear verdict that the authors believe that Trump’s South Asia strategy is on the right course despite the fact that it can do better. The review notes all the ways in which the Trump strategy is new. The strategy, according to the authors, firstly focuses on bringing the conflict to an end on terms that are acceptable to the Afghans and the partners. Secondly, the strategy wants to preserve “achievements in Afghanistan that have contributed to American security”. Thirdly, it enables the country to get stabilised and self-reliant eventually whilst also bringing Taliban to the negotiating table so as to end the conflict.

The authors believe that the strategy has already started to work, “Success will require demonstrating to all concerned—especially Afghanistan’s adversaries and neighbors—that the United States is committed to the strategy, and to fostering the crucial political process required to end the conflict.”

The review points out how this strategy of Trump fills the gaps from the time of Obama administration, the weakness being announcement of accelerated withdrawal of US troops from Afghanistan. The authors call that proposal of Obama “counter-productive”.

The authors note that “Afghan President Ashraf Ghani has made clear that he is willing to take risks for peace. His government has also demonstrated its determination to defend the country, at great cost. For years, the United States’ Afghan partners have taken the lead in the conflict, and done the vast majority of the fighting and dying. Continued US funding for the Afghan National Security and Defense Forces (ANSDF) is critical, as is the long term international support demonstrated at the recent Brussels NATO Summit.”

It was also pointed out that Afghanistan’s military capacities are growing. But keeping in mind all the current challenges in Afghanistan, the authors list a set of recommendations for the implementation of Trump’s South Asia strategy.

The recommendations are: demonstrate strategic patience and commitment, demonstrate that US is arming itself with political instruments whilst the review appreciates appointment of Zalmay Khalilzad as US Special Envoy for Afghanistan Reconciliation. Thirdly, the US should engage in a public diplomacy campaign. Fourthly. There has to be amplification of regional components of the strategy especially with respect to Pakistan. Moreover, assure a stable Afghanistan to its neighbors and not to undermine their interests. Furthermore, deal with the “ambivalence of Iran and Russia”.

Additionally, cut the narcotics production and trade which are a lifeline for Taliban and other terrorist groups. Moreover, it has been suggested that the Taliban legitimacy has to be ‘attacked’ by undermining its ideology with the help of Islamic International organs. Finally, the authors recommend that the US renew its direct contacts with the Taliban but in partnership with Kabul.

The authors thus concede that the investments of the past several years have “paid substantial dividends” as they demonstrate from the various improvements in Afghanistan from economic growth to political democratic developments.

The review concedes that “Overcoming decades of violence in a poor country, even with considerable outside assistance, is a task not easily achieved. Success in implementing the Trump administration’s  strategy,  and  President  Ghani’s  vision  of  peace via reconciliation with the Taliban, will validate the many sacrifices Afghans, Americans, and the international community have made. It will make Pakistan and the region more secure and prosperous, enable the withdrawal of foreign military forces, and—with continued counterterrorism cooperation with Kabul and improved cooperation with Pakistan—mark a significant advance in the struggle against Islamist terror. That is an outcome deserving of continued long-term US and international engagement, and the support of those publics“.