Narratives » Central Mountain Biking Team: How an Afghan Couple are Encouraging Youth to Tale Up Cycling?

Central Mountain Biking Team: How an Afghan Couple are Encouraging Youth to Tale Up Cycling?

Mustafa Rasouli and Narges Hakimi are the young couple who have been cycling for several years now. Mountain biking is a sport of riding bicycles off-road, often over rough terrain, using specially designed mountain bikes. Mountain bikes share similarities with other bikes but incorporate features designed to enhance durability and performance in rough terrain. Mountain biking can generally be broken down into multiple categories: cross country, trail riding, all mountain (also referred to a “Enduro”), downhill, freeride and dirt jumping.

Mr. Rasouli was born in Kabul city in 1992 while Ms Hakimi, his wife, was born in 1996. Ms Hakimi also holds a diploma in electrical engineering. 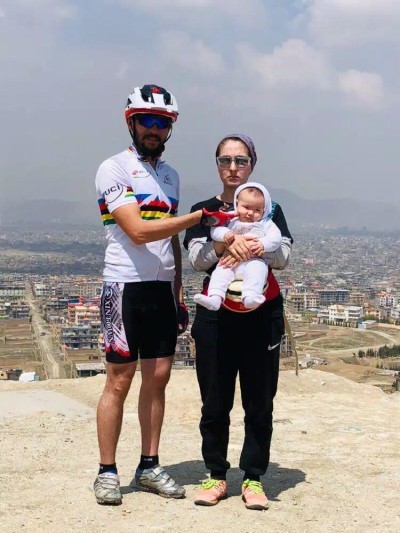 Ms Hakimi has previously lived in Iran where she was involved in swimming, gymnastics and fitness. After returning to Afghanistan she gave up swimming and gymnastics due to lack of suitable environment and facilities for the fields. Instead, she pursued biking because she says that her breath and body strength are appropriate for this sport.

“I liked biking since my childhood, and I used to watch mountain biking on TV outlets and YouTube, and I think it is one of the most exciting sports,” said Mr. Rasouli when asked about the motive behind choosing this path and sport.

The interest and motivation in biking led Mustafa Rasouli to national and foreign tournaments. He liked to take part in many cycling competitions to increase his experience in this sport. He participated in one of the tournaments in Iran, which had an informal aspect. It was then that he got acquainted with Nargis Hakimi because she was also one of the participants who had been biking unprofessionally for four years.

“When I went to a private competition in Iran, I met my wife, Nargis. She had grown up in Iran and it was hard to say that she was an Afghan. After I got to know her through some conversations, I realized that Nargis is also an Afghan. She was a mountain biker just like me and I told her about Afghan mountains and our friendship started right there,” speaking to Reporterly, Mustafa talked about how he got to know his wife. 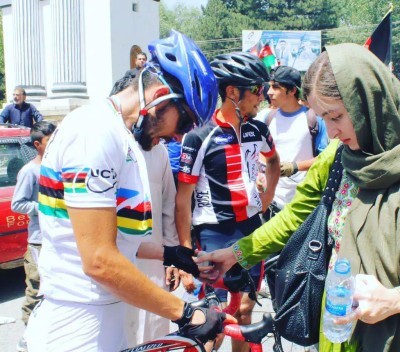 Nargis Hakimi told Mustafa about the hardships of immigration and the opportunities taken from her. She spoke about the fact that refugees are not allowed to participate and the likelihood of participation in sport matches being very less during their education in Iran. This was the theme of the conversation between them for sometime.

Mustafa suggested Nargis to make the journey back to Afghanistan. She accepted the offer and returned to the country where she joined the cyclist team of Afghanistan.

Ms Hakimi stood at 4th position in one of the competitions which was organized in Paghman Road. Mustafa and Nargis’ friendship continued until he presented her with a marriage proposal.

“Now, we can be the couple who can practice and take part in the tournaments together and can win medals and bring pride for their country,” Mustafa said.

Currently this young couple is coaching a team of girls and boys who are trained individually and in accordance with their conditions.

The Central Mountain Biking team is now practicing with two groups of girls and boys. They also won prizes from Physical Education department and Olympic Association of the country. This team consist of 13 members, 6 of whom are girls.

Though this team has a profound passion for mountain biking, they don’t possess bikes themselves. It is a challenge but the young couple (Mustafa and Nargis) use their own bikes for the purpose of training this group. 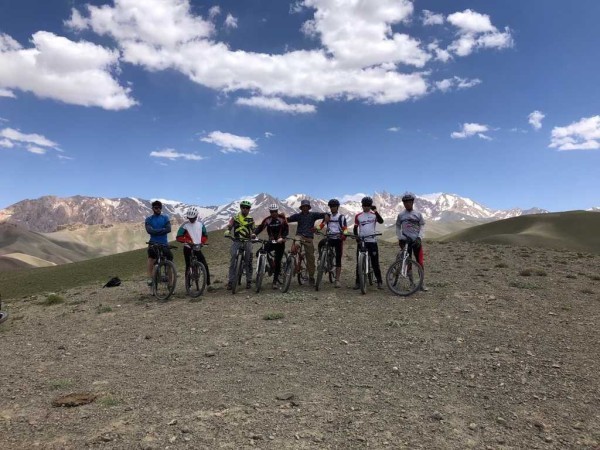 Albeit in other countries mountain biking is one of the most popular sports and stands at the top, the sport isn’t commonplace in Afghanistan, and fans of this sport face a lot of shortcomings and problems, including lack of facilities and family traditions that restrict them.

“As a refugee, we have never had the opportunities others have had and we always faced so many problems,” Ms Hakimi told Reporterly while recalling her life in Iran.

She had been practicing unprofessionally for four years and later started professional training. Nargis also went to Iran’s sport federation for a couple of times to check the possibility of joining it, and although they had no objection to her entrance in the federation, the real problem was that they did not agree to render support.

However, getting acquainted with Mustafa helped Nargis to have his support in training and educational programs.

Challenges in Pursuit of Success

Returning to Afghanistan had not been easy for Nargis. She also faced many problems when she joined the Afghan Sports Federation. She not only encountered problems in sports field but received the disapproval of her husband’s family.

Her husband’s family didn’t want her to participate in cycling as well as any related tournaments, but her spouse had always supported her in this endeavor and helped her pursue what she started and loved to do.

She currently coaches a group of a six-member team of girls with the support of her husband. “Girls hold great interest in cycling but they are worried about their safety. After the federation’s incident, families are less likely to give permission to their daughters to play sports,” said Ms Hakimi. But her husband told her that he will get a license to establish a club where families can safely send their daughters for practice.