Pakistani Twitter handles produced and amplified massive amounts of propaganda and targeted disinformation after the deadly May 12 attacks in Kabul and Nangarhar provinces. Reporterly got access to a “Analysis of Social Media,” which says the Pakistani propaganda operations appear to be part of an ongoing systematic campaign to build a negative image of Afghanistan and Indian security agencies. They have also been creating a false discourse around the peace process in Afghanistan.

The report, which Reporterly accessed, recorded propaganda content distributed on Twitter through a network that was traced to Pakistan. A forensic analysis showed that 5000 tweets and retweets circulated from over 120 handles during the first 24 hours of the attack. The message had the same discourse which included numerous claims and allegations against Afghanistan’s President Ashraf Ghani, the Afghan intelligence agency, and the Indian government and security sector – accusing them of conducting the Kabul attacks. 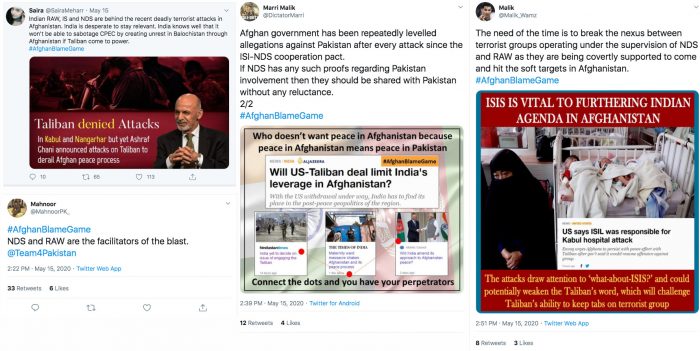 On May 12, gunmen attacked the maternity ward at the Dasht-e-Barchi hospital in Kabul, killing at least 24 people, including 11 women and two children. At least 20 more were injured including two newborn who were transferred to another facility for treatment. Médecins Sans Frontières (MSF) which manages the hospital called it a “deliberate assault… with the purpose of killing mothers in cold blood.” While the Taliban did not claim responsibility for the hospital attack, Afghan officials on May 15, announced them as the perpetrators. The hospital was located in the Hazara Shia dominated area of Kabul.

The same day, a suicide bombing attack at a funeral ceremony of a local police commander in Nangarhar province, killed 32 people. ISIL claimed responsibility for the attack and posted a message on Telegram: “The jihadist… hit Afghan security forces and militia allied to Nangarhar, exploding his [suicide] belt … [and] killing and wounding 100 non-believers.”

In response to the increased militant attacks, Ghani ordered the resumption of full “offensive mode” against the Taliban and other militant groups even as the Taliban denied involvement in both attacks. This ended the period of reduced military activity ahead of U.S.-brokered intra-Afghan peace talks peace talks.

The documents reviewed by Reporterly confirm that Pakistan’s Inter Services Public Relations (ISPR), the media branch of its Army, was behind the Twitter propaganda machinery that designed pictures and coordinated similar messages following the May 12 attacks. The tweets made bold accusation claiming Indian intelligence agency, Research and Analysis Wing (RAW), and Afghanistan’s NDS were involved in the brutality. It appeared to blame the Afghan president and accused other related actors. 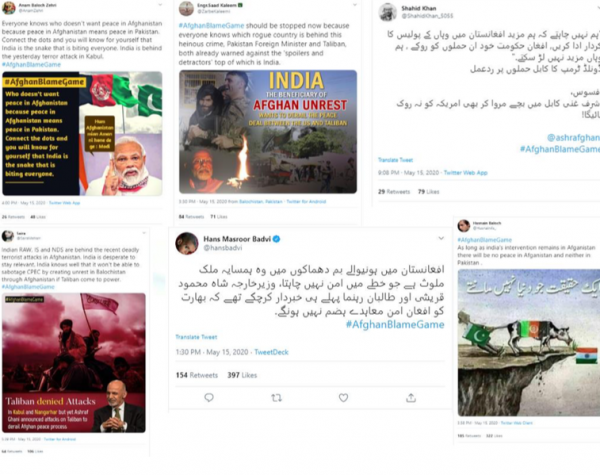 This Twitter campaign had over 28,000 engagements and reached 12 million people within two days. Moreover, over 72% of the tweets originated in Pakistan and were retweeted from other countries.

A linguistic analysis shows the tweets were majorly in English to reach a wider audience, with over 77% made in the language. The other tweets were posted in Urdu, Pashto, Arabic, Persian and Tamil.

The networked social media campaign against Afghanistan, came days after the Afghan security forces arrested three senior South Asia Islamic State (ISIL) members, including Chief Abu Omar Khorasani and Aslam Farooqi, the group’s Khorasan leader. After these high-profile arrests, Afghan security forces revealed that regional intelligence agencies were behind ISIL’s presence in Afghanistan. Findings of a paper by the Afghan Institute for Strategic Studies corroborates this. “Notable Afghan security experts are convinced ISK [ISIL in Khorasan] is the manifestation of an ‘intelligence game’ being played by Afghanistan’s neighbors.” The paper quotes
Afghan Vice President Amrullah Saleh’s at the 2018 Tehran Security Forum where he claimed “the presence of ISIS in Afghanistan is not genuine. It is an intelligence game [played by] some of our neighbors.”

The current incidents and reports have made it evident that Twitter and Facebook have emerged as the platform for the cyber war against Afghanistan. This new tool for spreading propaganda has added to the complexity of the current insurgency and destabilization of the country.