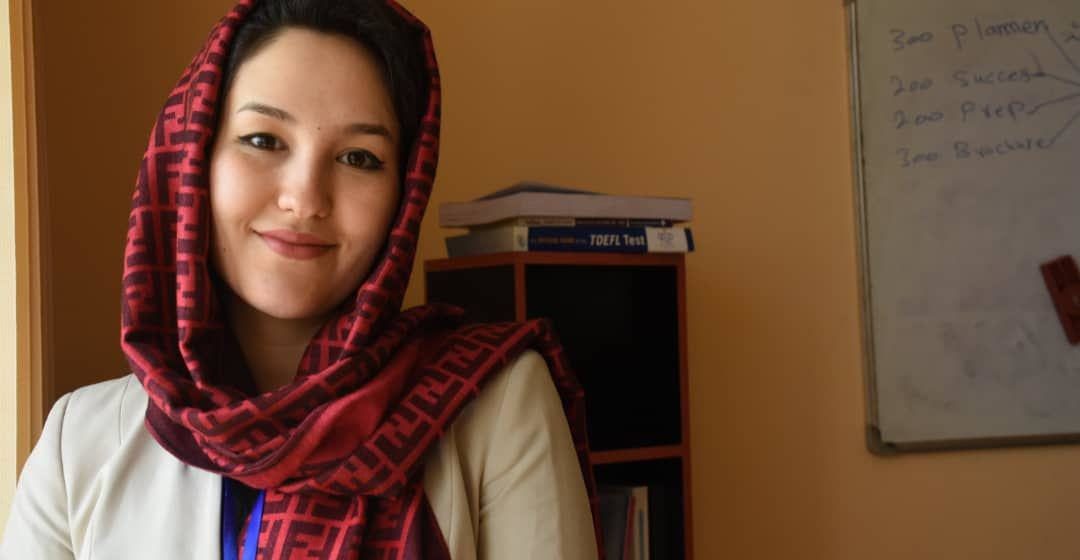 From a Victim to an Advocate: The Inspiring Initiative of Sohaila Hashemi for Epilepsy Patients in Afghanistan

Sometimes things happen that change our lives forever, as the world keeps going, and may stop just for a second. When Sohaila Hashemi was eight years old, she suddenly fell on the floor and became unconscious. By referring to doctor, she and her family found out that she was diagnosed with epilepsy.

Back then she was just a child and without a doubt childhood is the best period of anyone’s life. But this child could no longer cherish the tranquility, childish laughs, plays and fun like her peers and friends. Instead, she depended on medication on a regular basis and her family members had to take care of her to prevent the disorder from crippling her.

Sohaila Hashemi considers herself as a fortunate person. Speaking to Reporterly she said: “I am a lucky person who had the opportunity to receive medical attention and care at the right time, which helped me live a better live now.”

According to Ms. Hashemi, she has always gone through difficult times since her childhood. Even for a couple of times, some of her friends and peers called her a “lunatic”.

Perhaps this was the lowest kind of insult she faced from her friends and peers. In many cases in Afghanistan, there are stories that women, girls/boys bear far more serious problems and abuses. They are dubbed as “gnawed” due to superstitious beliefs that people have about individuals living with epilepsy.

In spite of all that, Ms Hashemi has a different story. She is 26 years old now and was born in 1992. Her family’s hometown is Behsud district of Maidan Wardak province. 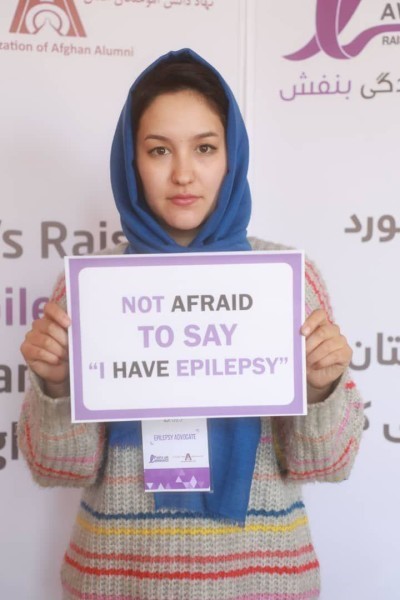 According to Ms. Hashemi, she has always gone through difficult times since her childhood

Ms Hashemi holds two degrees in two different fields. She obtained her first bachelor’s degree in Spanish Literature from Kabul University. She later studied management at American University of Afghanistan (AUAF) so that she could bring about profound changes in her life and the community as a whole through the opportunity at AUAF which equipped her with management and leadership skills and knowledge.

Ms Hashemi started having General Tonic Clonic Seizures in her childhood. With this type of disorder, an individual suddenly passes out with seizures.

Hashemi’s life took a different track when she was diagnosed with this disorder. As a person with neurological condition, she had many difficulties ahead, and faced many social and personal challenges.

She experienced the unkindness in university dormitory. Ms Hashemi says that, she was given a second-bunk bed in dorm. Even though she spoke with the dormitory in-charge about her condition and the issues she could face due to sleeping on the second-bunk of the bed. Instead of considering her condition, the in-charge viciously teased her and it was then that Sohaila realized that even at university level, there is no awareness regarding epilepsy and the risks that it poses.

Although Ms Hashemi has always tried to bring a shift in the attitude of people around her as well her social circles, but the misconceptions about this neurological condition linger to hurt her; the misconceptions of epilepsy as mental illness and “madness”.

Ms Hashemi told Reporterly: “When I taking the initial steps, I always had the doubts whether I should really speak about this issue or just keep it hidden. But later I jumped to conclusion that it will not be possible to hide it for good and therefore decided to say that I am not afraid to say “I have Epilepsy”.”

The American University and the opportunity provided through a U.S. government funded scholarship flickered hope and opened a new chapter in Ms Hashemi’s life and her dream to make a difference through raising awareness about epilepsy.

Ms. Hashemi spoke about one of the competitive programs at American University of Afghanistan which enabled her take the first step in initiation of this organization.

She found the chance to participate in one of the university’s programs during her studies in management at the university. In this program a small grant is given to a new idea and initiative that triggers changes in social conditions.

During her studies in management discipline at the American University in 2018, she designed her initiative and won the small grant of the Organization of Afghan Alumni which helped her to start the epilepsy awareness campaign called Purple Life Awareness Program.

“If I win the initiative, a milestone will be achieved,” thought Sohaila Hashemi. She successfully won the award of 50,000 AFN and with that she just ran the first mile of a long road ahead.

Ms Hashemi explained that after in-depth research, she came to know that no special attention is given to epilepsy in Afghanistan. Therefore, she attempts to bring about change in this regard and prevent the social stigma and bullying that epileptic children go through in Afghanistan.

Now with that hopeful spark, Ms. Hashemi has founded an organization called “Purple Life”. She chose purple and attributes it to the name given to epilepsy-the name taken from a flower called “Lavender”.

This is a newly-established organization that aspires to render services on five areas. “We have 5 departments in the organization, they are, Education and Empowerment Department, Gender Department, Media and Information Department, Research Department and the Investment and Opportunities Department,” she said. 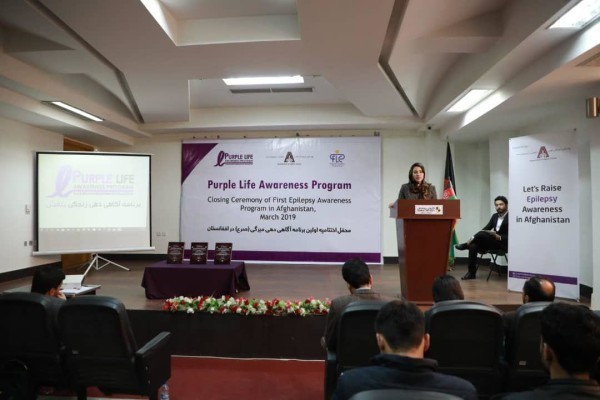 At the initial stage, the organization aims to provide educational opportunities for a number of children and young people who quit studies due to the neurological condition. That’s not all, the organization also envisions to play a promotional role in the lives of children and young people through creation of suitable jobs for them because individuals living with epilepsy cannot run every kind of work. Some works are considered to be harmful for those with epilepsy.

The NGO is contributing for the women at the central and provincial level to raise aware about epilepsy because many women, living with epilepsy face extreme misconceptions about it.

Since the beginning of her journey, Ms. Hashemi has conducted a two-month training program. She first visited schools and held awareness training sessions for primary school teachers to help them know about first aid and general information about epilepsy, its types, and characteristics as well as the rights of epileptic people.

In addition, Ms Hashemi tried to give information about epilepsy to families of the children and also talk about the treatment. She says that children living with epilepsy suffer from insomnia and stress, therefore, they need to be treated with passion and kind and considerate behavior.

“Some parents believe that individuals with this condition should visit Mullahs and some hold the belief that even they have visited a doctor, their children did not get well so the parents stopped seeking medical help from the hospital anymore,” Sohaila Hashemi described.

“In our trainings, we also tried to help them understand that epilepsy can’t be treated with a prescription and epileptic people need to use non-stop medication so that a relative healing is achieved because epilepsy cannot be tackled for good but through use of medicine, good results will come to existence” she said.

Ms Hashemi plans to work with children above 8 years of age as well. She says that through the program she has designed, the children will come to know about this disorder so that they understand how to behave with their peers that are living with epilepsy. 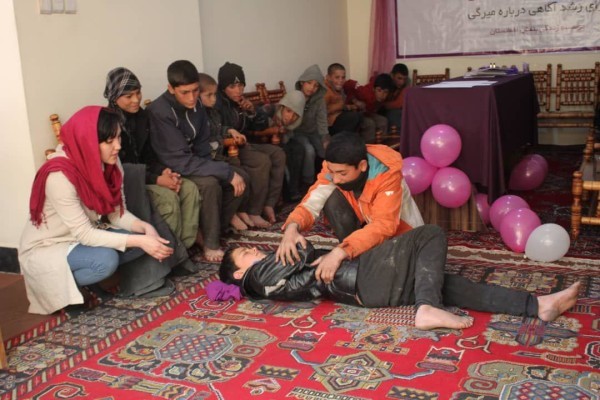 Since the start of her journey, Ms. Hashemi has conducted a two-month training program with a focus on three groups of people

Initiative for a Nation

Ms Hashemi attributes her goal of establishing “Purple Life” to spreading her activities to every corner of Afghan society. “I am trying to raise awareness and help Afghan citizens with the condition to understand that they should live with epilepsy and also strive to improve the condition of people suffering from this disorder,” said Sohaila Hashemi.

Her inspiration is to spread her amazing initiative countrywide and, in the process, encourage other young people to take the initiative, advocate and help raise awareness about it and more importantly help epileptic people emerge strong and live their lives despite living with it.

Even though she has done an unprecedented work and touched hundreds of live, that is not the end of the story for Sohaila Hashemi. She considers the possibility to import epilepsy drugs which are not currently available in the country. Ms Hashemi herself is one of the people who had received treatment and achieved good health as a result of medications.

Sohaila stands as a beacon of hope for the group of people with epilepsy who are given a cold shoulder just because they have a neurological condition.

Currently six people work as team-members with Ms Hashemi as well as 16 volunteers who as a collective body aspire to circulate their activities in every part of Afghanistan. The country needs young and strong leaders like Sohaila Hashemi who care about the one life as much as she cares about the hundreds and thousands.