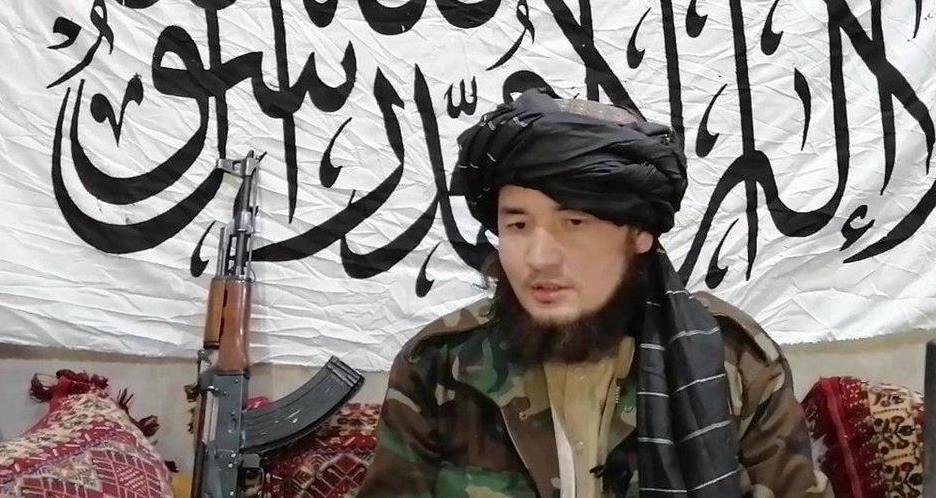 Recently, a video showing the interview of “Mawlawi Mahdi Mujahed“, shadow district chief of Taliban for Balkhab district of Saripul province with “Al-Emara” studio, went viral on social media and followed by many reactions. In this interview, Mahdi Mujahed, who introduces himself as a Shia (Shiite) Hazara, has dressed up in Osama bin Laden’s style, has put a Kalashnikov next to him and a white flag of Taliban group is in the background.

In the video, he tries to talk like the Taliban, but his Hazaragi accent affects the heaviness of the Hadith. He says in an interesting and clumsy way: “The way you just expressed the position of the Islamic Emirate towards the Shiite people, Alhamdulillah, I, even don’t know how to express, I found it very good and appropriate.” Later in the interview, Mahdi calls on the Shia people to join the Taliban’s Islamic Emirate. He insults Shia religious scholars with an aggressive tone and calls the Taliban’s Islamic Emirate a green light. Mahdi Mujahed is not a big deal to be discussed, but the contradiction and vulgarity of this issue led me to address it.

Who Is Mawlawi Mehdi?

According to a conversations I had with local people and some relatives of Mawlavi Mahdi who spoke on condition of anonymity, Mehdi is the son of Morad Mujahed, a native resident of “Hawash” village, Balkhab district of Sar-e pol province whose family currently lives in Sancharak district of Sar-e Pol province. Until grade eight, Mahdi studied at Sayed Jamal al-Din Afghani School in the Tarkhoch area located in the center of Bakhab. Mahdi’s story begins in 2010 when he returns to the region from Iran. Earlier, Mahdi’s family had fled the area because of a land dispute occurred in “Chehel Kawah” area with an individual named Ali Jomah Akbari, a jihadi commander.

When Mehdi Mujahed returned from Iran, he and his friends abducted Akbari’s son and took him to the mountains. In this regard, the elders of the region mediated and paved the way for negotiations between Mahdi and Akbari; in the end, the two sides agreed that Mahdi would release Akbari’s son and the opposite side “Abkari” returns the land and 4 Kalashnikovs he had obtained by force from Mahdi’s family.

The framework of the intervention/dissuasion was such that after the release of Mr. Akbari’s son, the next day, Mehdi was to be hosted at Mr. Akbari’s house and at the night Mehdi had to host Mr. Abkari. But the next day, when Mehdi wakes up, he finds his home surrounded by security forces who came during the night from Sancharak and Balkhab police headquarters. Following an exchange of fire, Mehdi and his five comrades get arrested on charges of kidnapping. Consequently, Mehdi was sentenced to fourteen years of imprisonment at Jawzjan prison where Taliban members were also confined.

Following his release, Mehdi returns to Balkhab as the commander of the local police and began to extort money and sometimes fight with the local government. This continues until the 2019 parliamentary election campaigns. At the beginning of the campaigns, Mahdi extorted money from some candidates of parliamentary elections, but in the end, he did not let any of the candidates to run their campaigns in Balkhab. This issue led the Afghan security forces to conduct clearance operations one week before the Elections Day on “Dahana” area where Mahdi’s checkpoints was located.

As a result of the operation, seven security forces and members of Public Uprising Forces who had stood against Mehdi in the support of the government, were killed. But Mehdi survived the operation and moved from the Ab-e-Kalan area to the Dah Mardeh area where Taliban has a presence. It was then that he was appointed as shadow district chief of Balkhab by the Taliban group.

Looking to Mahdi’s photographs after his release, the prison was an intellectual development for him, growing beard, Taliban way of clothing and appearance, he is now a fighter and a rebel who is a viable option for Taliban propaganda. But the main question is how Hazara and Shia’s identity of Mawlavi Mehdi be reconciled with the ideology and religion of Wahhabism/ Salafi Taliban? While the Taliban’s existential philosophy has opposed the Shia sect and many ethnic minorities.

The Religion of Taliban

Classic fundamentalists saw the government as a tool to Islamize their countries and the domination of the state was their main priority in the political struggle. However, the new fundamentalists, despite adhering to the ideal of an “Islamic state,” do not consider the formation of an Islamic state to be the highest priority of their struggle, and in fact are not “state-oriented” in the manner desired by the classic fundamentalists. Although the new fundamentalists strongly demand the implementation of Islamic law, they do not necessarily emphasize the government’s obligatory role in the implementation of Sharia law. New fundamentalists reject the modern state stemming from the idea of European nation-state, and draw their desired state in the form of an Islamic caliphate throughout the Islamic world; a caliphate consisting of various Emirates and an Emir for each Emirate to enforce the Sharia.

In terms of intellectual genealogy, Sayed Qutb and Abul Aala Maududi are considered as intellectual models of the new fundamentalists. As one of the influential figures in the formation of the methodological foundations of Islamic fundamentalism, Sayed Qutb believed that Islamic ideology would not be free of contamination, deviation and metamorphosis unless we all return to the principle of the Qur’an and the Prophet’s tradition. Therefore, in the intellectual and ideological apparatus of the new fundamentalists, one of the religious groups that has no place and should either be converted to Islam or eliminated is the Shiites.

The new fundamentalists, who are generally the followers of Wahhabism and Salafism, have a special title for Shiites, Rafidi/heretic. That is, a religious group that has rejected the caliphate and tradition of the Prophet. It was based on this ideological and intellectual basis that Mullah Mohammad Omar, the Amir al-Mu’minin and the founder of the Taliban’s Islamic Emirate, justified the massacre of thousands of Shiite Hazaras in Mazar-e-Sharif, saying, “There is no difference between heretics and Shiites and it is an obligation to fight them. It is ok to interact with their women.” It was with this fatwa of the Amir al-Mu’minin of the Taliban that Mullah Abdul Manan Niazi said during the battle of Mazar-e-Sharif in late 1990s: “Tajiks go to Tajikistan, Uzbeks go to Uzbekistan and Hazaras go to cemeteries.” However, some think that Taliban have changed, but this recent saying of Mullah Fazel, one of the political leaders of Taliban in the Qatar Office, who spoke about Al-Qaida to the military commanders of Taliban in Quetta, Pakistan, “They rejoice at the killing of a Taliban and his martyrdom and thank god saying that have killed a disbeliever. They are not happy about killing a disbeliever or Hazara Shitte or any other criminal,” has a clear meaning that Taliban have not changed with their dogmatic believes particularly with regards to Hazaras Shiite.

Nevertheless, the Taliban need soldiers on the battlefields in the current situation, as they have recruited Uzbek and Tajik tribesmen in northern Afghanistan, but there is no indication of change of ideological and nature in the leadership and key positions. On the other hand, by using the instrumental role of individuals such as Mawlawi Mehdi Mujahed, they show their group, in the peace process, not to be dependent on a particular group and sect, but as an Islamic emirate consisting of different ethnicities and sects.