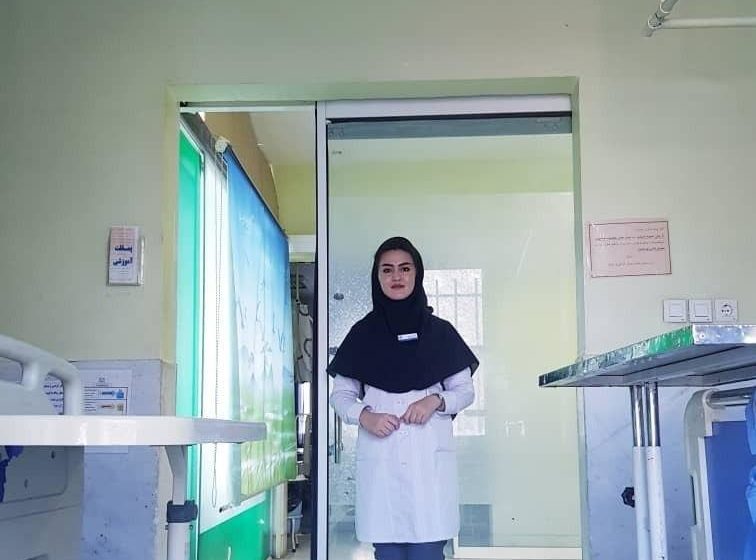 From Daikundi to Mashhad; Dr. Najiba Gholami, the Last Year of Education and Championship in the Coronavirus Era

Recently, an Afghan girl became one of the heroes of the virtual world of Afghans due to her awareness building activities in the Coronavirus area. She is Dr. Najiba Gholami.

Dr. Gholami coincided with the coronavirus epidemic while she was undergoing training and experimental courses in the infectious and emergency departments of Imam Reza Hospital in Mashhad.

However, she could have resigned and not put herself in danger, but remained and continued to work for a month and a half at the hospital that was now a place of admission for coronavirus patients.

Najiba herself has an interesting view on this. She sees this as an opportunity to gain valuable experience and skills. For this reason, she did not back down and continued to do so, despite the fears and worries of her family, who now call her several times a day.

“At first, there was fear and hardship, like anywhere else, because we didn’t know enough about the virus, but over time, we all overcame our fears and then, despite all difficulties, we enjoyed the environment, which was scary for many,” Najiba told Reporterly during an inclusive interview.

Recently, a group called the volunteer doctors has been formed by Dr. Gholami and several other doctors.  Dr. Gholami plays a coordinating role in this group. She suggests that in Afghanistan, too, we can use the group of doctors we have or the medical students who are studying their last years.

Najiba says the group has contacted several doctors abroad and asked them to speak to the Afghan people. The group has other plans, including creating a page called “Coronavirus Fighting Group” on Facebook, and a doctor is scheduled to talk live about the current crisis every night.

Najiba believes that in a situation where the country is in crisis and the situation may worsen over time, the least that can be done is to make people aware of the coronavirus through brochures and other possible methods.

The goal of the Volunteer Doctors Group is to ultimately carry out its programs nationwide, but the implementation of this goal depends on the level of cooperation between physicians and volunteers.

“We thought it would be a national program, but which provinces they want to work with depends on how well they respond and how much they help us,” Najiba said.

She believes that now is the time to forget personal interests and all of us should work to get out of this crisis. The solidarity of the people, doctors and volunteers in this situation can be the prelude to taking a big step in the country.  Currently, the group’s activities have begun in Kabul.

Dr. Najiba Gholami was born on February 4, 1994 in Daikundi province and lived there until she was seven years old. She then moved with her family to Herat, where she completed her high school education and entered the university to study medicine.

Najiba has dreamed of becoming a doctor since she was a child. “As a kid, I used to have a lot of fun seeing doctors when I went to the hospital,” she said. “Besides, my parents always wanted to see me in white clothes.”

She studied in the pre-college years before the entrance exam with the aim of being accepted in the field of medicine, and finally achieved her goal.  After a year and a half of study in Herat, she received a scholarship from Shiraz University and emigrated.

However, with the request of his family, and after referring to the relevant authorities, she will continue his education in Mashhad. It’s been seven years since she entered Iran!  Seven years of experience, studying science and living in a country that she had never been there.

The hardships of the route

In a country like Afghanistan, where it was not easy for girls to study, Najiba had a family that broke taboos and supported her all the way.  At the beginning of Najiba’s path to her future, and at the beginning of her study trip to Iran, her family heard a lot of talks and reproach from the Afghan closed society, but regardless of all this, they continued to support Najiba both spiritually and financially.

Najiba herself believes that while it has been very difficult for her to stay away from her family for the past seven years, the same support has made her more willing to pursue her goal.

“Living and studying in another country with a different culture and dialect has been a wonderful experience for me.  Although I struggled away from my family, I grew up mentally and emotionally.  Now I think all these hardships are worth it,” she added.

Najiba is currently studying in her final year of medicine and plans to take an exam this year. This is her most important goal.

“Whether in Iran or in any other country, my goal is definitely to do my specialization. Then I will return to my country and to my family. I would like to work for the people of my country,” she said.