Narratives » Inspiring Women of Afghanistan: Batool Naseri, a Girl Who Altered the Otherwise Grim Picture of Immigrant Afghans in Iran

Inspiring Women of Afghanistan: Batool Naseri, a Girl Who Altered the Otherwise Grim Picture of Immigrant Afghans in Iran

“I was happy to know that after all the conflicts and spiritual tortures I suffered, my mother became my supporter in the end. Before the program was recorded, when I was sometimes on television for recording until 4 am, my mother would get upset about the situation and did not let me inside the house. I stayed behind the door for hours until my little sister secretly opened it. I can never forget that one night I stayed late at the studio to record the program, and on return, I only had the key to the outside gate, and didn’t have the key to the main building, so I had to stay in the courtyard. It was freezing out there and no one opened the door for me and instead said “we don’t want this girl”. I soaked my cold feet in hot water to warm them up! It was very cold, I took the towels that were hung on the rope and wrapped them around my body to keep myself warm. I stayed in cold weather for three hours until my sister opened the door and took me secretly to my room.”

Life has never been easy, and for those who want to fight it, it will be even harder. This is true with the fate of Batool, a girl who struggled with all the problems of life and achieved great things.

Batool Naseri, an Afghan immigrant living in Iran, speaks about her life full of difficulties and hardships.

Batool was born in a religious and conservative family that opposed the idea of female members of the family working outside. She is the fifth child of her 10-member family. She graduated from high school majoring in child training and completed her associate college in the field of Islamic science and education. Ms. Naseri earned her BA in Islamic Theology from the University of Jamiat-al-Zahra in Qom.

Her father, who is no more now, was a writer, scholar, and lecturer, and he too spoke to all women and men. 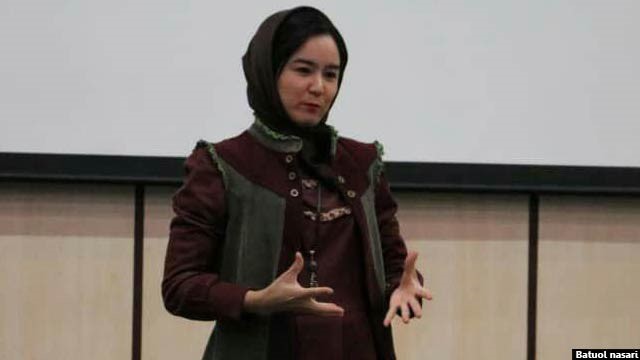 Batool now lives with her mother and two sisters in Qom. She has to spend 5 days in Tehran and 2 days in Qom each week. Her mother is ill and suffers from diabetes, high blood pressure, fatty blood, liver and kidney damage that needs dialysis.

The 26-year-old who is still unmarried told Reporterly in this regard: “If there is someone who is closer to me in mind and thoughts and can help me achieve my goals, I will marry him, but there should be someone who adds something to me, not take from what I already have.”

A Spark of Change

As a teenager, she was a shy and isolated girl, to such an extent that she was embarrassed to greet others.

After enduring this difficult period, she sought to find a solution to eliminate the sense of embarrassment and enter the outside world, thus she began to work at the age of 18 for financial independence, while she encountered the prohibition from her father.  But she stayed strong and could finally convince him. Although, relatives expressed their dissatisfaction with the issue, Batool did not pay much to these concerns.

“The year my father passed away, I was severely depressed, and my depression and mental condition affected my education, and my grades dropped in class as a result,” said Batool, who lost her biggest support, her father, in 2012.

Batool saw the year 2015 as different from other years of her life, which sparked her luck by giving her an opportunity to present an announcement in a telegram channel called “Empathetic Student Channel.” 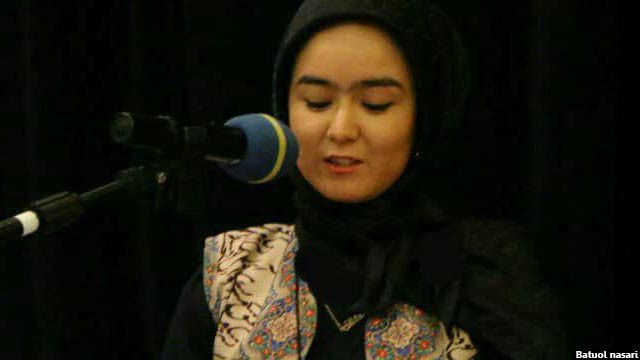 As a teenager, she was a shy and isolated girl, to such an extent that she was embarrassed to greet others

“I initially thought that this channel should be for deaf communities to learn speaking skills,” she said, “But at the first session, the day I was introduced to the class programs, I realized that I completely misunderstood, and this was a public speaking, lecture, and expression class. The professor was speaking very beautifully, and I said to myself, maybe I cannot talk like him, but it’s even enough for me to push away my shyness, and I decided to attend this class. ”

Batool continued to explain that “Two months past this decision, one day the teacher questioned my decision to participate in the class and commented that I was very weak to attend the class, that it would not work for me. Although I was saddened by this, I did not stop and tried my best to make a change”.

“This one time, students were supposed to prepare for a contest in which they had to deliver poetry and perform as presenters. Everybody took the test, and the teacher did not give me the test, because he believed that I could not handle it. In order to prove it to my teacher that I could, I practiced for a week at any place and time in order to strengthen my speech. At the next session, the teacher did not allow me to take the test again until all the students insisted on giving me a chance. Thanks to their pursuance, I stood in front of the classroom, and passed my tryout. The only thing that mattered at that moment was to prove myself as a capable person for the teacher, and as a result, at the end of my speech, the teacher along with 40 students in the class stood up and applauded me.”

“I can never forget the moment when the teacher said: “I cannot believe, you were great!” and that’s how I made my first speech to the students of Qom Azad University of Midwifery Studies”, she said.

The path to the activities of Batool Naseri

Batool Naseri delivered her second lecture in Tehran’s Roodhen, and later on, for two consecutive years, at different festivals on Afghanistan. She completed the public speaking, theatre and presenting courses in 2015.

Her public speaking teacher was “Ershad Ehrari”, who encouraged her with the most beautiful speech. Being aware of her abilities, Batool decided to learn this skill with more dedication under the supervision of skilled Iranian teachers. According to her, the public speaking courses contributed greatly to her personal development and purposefulness. 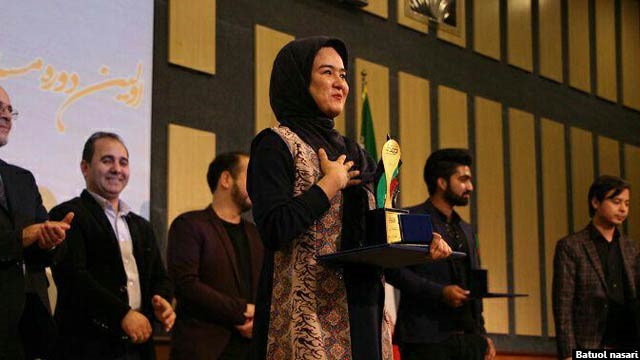 Batool Naseri delivered her second lecture in Tehran’s Roodhen, and later on, for two consecutive years, at different festivals held on Afghanistan

Although she has gone through many challenges, the young lady is encouraged by Ershad Ehrari, Mehdi Sadeghloo, Hossein Abedini, Morteza Shahtorabi, and Masumeh Ahmadi, her older sister-in-law.

After holding many public speaking courses for Afghan young immigrants; she also held two public speaking sessions, the first of which was attended by 70 in Tehran, and the second with 150 participants at the University of Mofid in Qom.

Batool teaches public speaking skills to the children of first to ninth grade at Safiran Mehr Aseman School in Shahr-e-Rey of Tehran. Also, Ms. Naseri is the presenter of the 90-episode TV show for kids and teenagers in Iranian children’s channel called “Hod Hod”.

The Hardships that Batool has Overcome

“One of the challenges that I am facing now is the belief of those who are around me who think I’m speaking to and in front of “Namahrams”,” Batool said. “It was serious to the degree that the people around me left me and they consider me as a “Betrayer of religion” as I recklessly worked with all men; they never encouraged me. Even my mother, who was the closest person to me, cursed me and told me “Why did not you become an Islamic narrator?” I admire their work, and at the beginning I was also an Islamic narrator, but then I realized that this is not my mission; I have not been created for a small group of people but to achieve the greater goals in the country and in the world. ”

“The problem with this community is that it’s a mistake for women to talk to men, while Hazrat Zeinab made a speech 14 centuries ago, and today I want to make the whole world aware with my very own voice that women should shine in all areas and there is no limit “, she said. 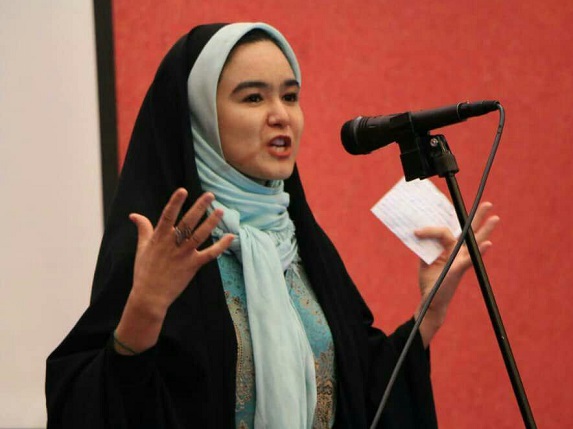 She noted: “Although the family strongly opposed my activities, I never gave in to their confrontations and tortures.”

One of the challenges this young speaker is facing like most of the immigrant young people, is to get a license to work across sectors.

Batool was not an exception either. She needed a license to set up her public speaking classes, but this opportunity has never been given to the immigrants. Batool Naseri held her first club in cooperation with theatre “Mam Meyhan” and completed her second club with the assistance of the university.

“The good thing about the program is that I’m going to universities and I conduct my programs with an agreement with them while using their license,” Batool said.

The young speaker has decided to hold her third and fourth club in the cities of Tehran and Isfahan this coming February. Batool believes that if her father was alive, he would have supported her in all these adventures and helped her attain success sooner. However, she is still happy and glad that her mother now believes in her and is certain that Batool, can make progress and that, is enough for Batool.

Batool managed to draw her mother’s attention, when she first appeared on Iranian television and was featured in a program called “Pelak 16” as the “Top Storyteller”. She was able to convince her family and mother that she could do this, but this was still not normal for them, until finally, their full satisfaction came with the release of the 90-episode program recorded on HodHod Channel, in which Batool appeared as the presenter. 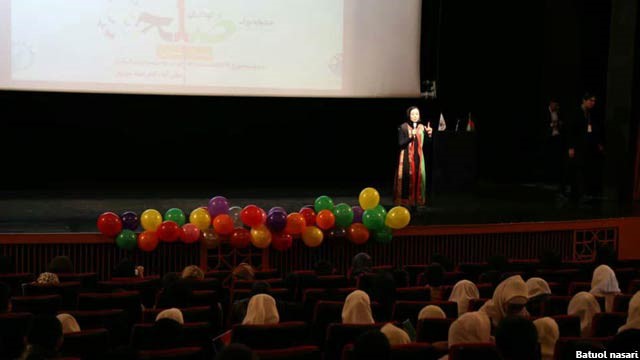 Batool believes that if he was his father, he would have supported her in all these adventures and helped her attain success sooner

“My goal is to make education pervasive among the Afghan refugees and young people so that they find their goals and ways to achieve them,” Batool added.

Batool is keen to teach public speaking skills to Afghan children and teens. In fact, Batool, with this beautiful idea, is looking for a big change for her generation.

According to her, “Migration is not a constraint, but it has helped me grow up and find my real self.”