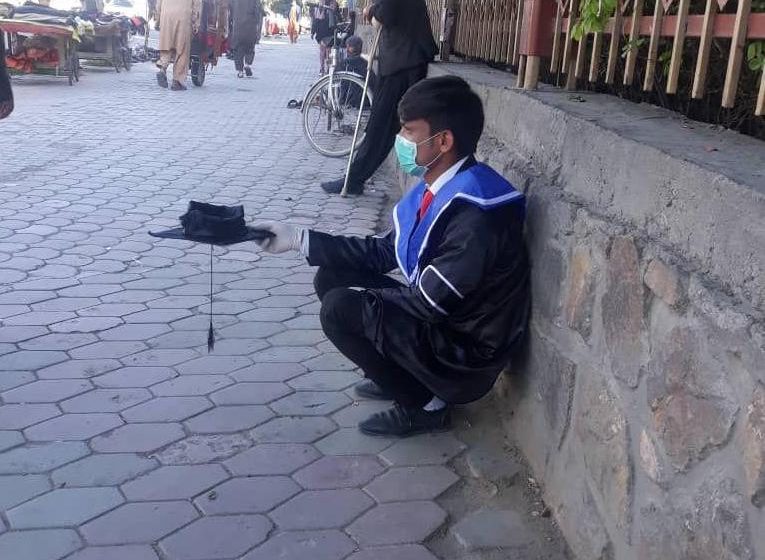 On Sunday, a young man from Daikundi province protested against the government’s disregard for educated youth in a symbolic gesture.

Ruhollah Naderi, wearing his leisure uniform, begged ten Afghanis in Deh Afghanan area of Kabul to show that there are many educated young people in the country who cannot find a job.

Ruhollah Naderi was born in Shahrestan district of the Daikundi province and graduated from the school in 2016.

He came to Kabul to take the entrance exam, and with the help of his family and friends, was able to find his way to Balkh University in the social sciences. But Mr. Naderi loved to study law since he was a child, so he began studying law at one of Mazar-e-Sharif’s private universities at the same time as the social sciences.

In 2019, Mr. Naderi obtained his bachelor’s degree in two fields. However, he has also worked as a day laborer, hard worker, and builder in order to graduate from his favorite field.

“I had arranged my plans so that at 7 o’clock in the morning I would go to the state university with my work clothes in my bag, and after a break from 1 to 4 and a half hours of part-time work at the building, I would change my clothes again to attend the judiciary classes. It was past nine o’clock at night, but because I was so interested in the subject, I couldn’t give up. I was willing to accept all the hardships,” Naderi told Reporterly.

During his studies, Ruhollah Naderi also had social activities and was for a time the president of the Daikundi Students’ Association studying in Balkh.

The association has more than 1,500 members and hosts most national and religious cultural programs.  Holding book reading competitions, introducing the needy to charitable foundations are some of the things that this association does.

Most of the students at Balkh University are now citizens of Daikundi, who often face financial difficulties.

After graduating from university, Mr. Naderi returned to Kabul and has been looking for work for more than a year, but to no avail.

“I’ve gone to a lot of places to find work, I’ve filled out a lot of forms, even in the housekeeping department, but none of them have answered, and in some offices the gatekeeper has asked me who introduced you to this for this position,” he said.

Ruhollah Naderi, tired of this situation, has made this symbolic move. However, his family was dissatisfied with his work and feared that their friends and acquaintances would reprimand or ridicule them.

Mr. Naderi has relocated his family to Kabul for a year, and now his sister is the only one who has salary in his family. His father has immigrated to Iran to provide for his children’s education, but is now unemployed due to the Corona outbreak.

Ruhollah Naderi continued: “This is not my only problem, but I know many people who are unemployed after school and have settled down. I know a friend who is 98% in his engineering degree, after a while.  He was a contract professor at a university and now lives at home. ”

He reminded other educated people that after looking for a job in the country and not finding a job, he went to Iran and now he is just a worker.

When he woke up yesterday morning and shared his decision with his mother, he went to Deh Afghanan in Kabul and begged there to attract the attention of the media and government officials and find a solution for himself and other young people.