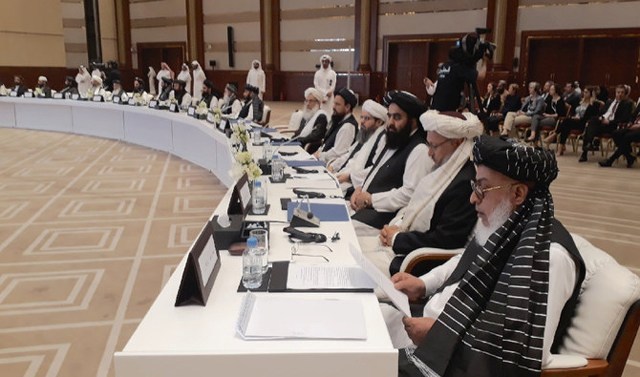 First Vice President Amrullah Saleh wrote on Twitter today: “Neither we nor the watchful world have evidence of Taliban – Al Qaeda divorce and separation. No single message from leaders in Peshawar and Quetta shura [leadership council] to fighters about peace. None. All we see from Taliban side is violence, killing and destruction. They believe they have deceived everyone.”

With this tweet, Saleh questioned the U.S.-led peace process.

The U.S. had hypothesized that the Taliban would secede from Al Qaeda, and had included it as a clause in the Doha Agreement signed in February. They had emphasized the severance of ties between the Taliban and Al Qaeda and a joint US-Taliban front in Afghanistan against the group.

The complexity of Afghan peace

The first vice president’s tweet came amid the video by Najia Anwari, spokesperson of State Ministry for Peace, said on Friday evening that the Afghan government’s negotiating team is technically, substantively and logistically ready to start the intra-Afghan negotiations.

She noted that the “initiative” to express goodwill to start the intra-Afghan talks had always been in the hands of the government and they were ready to sit across the table from the Taliban at any time.”

Meanwhile, the Taliban also announced their readiness to start the negotiations with spokesperson for the group’s political office in Qatar, Suhail Shaheen, tweeting on Thursday:

With these conflicting narratives, the Afghan peace process is becoming more complex as time goes on, and the ambiguity and involvement of other actors has increased.

Violence and war have continued to escalate across Afghanistan, along with the casualties on a daily basis. Military and civilian fatalities have risen in recent days.

According to the latest statistics released by the Office of the National Security Council on Saturday, the Taliban carried out 401 “movements” and attacks last week, killing 46 civilians and wounding 93 others.

Their data shows that violence has reached its peak in the wake of the start of the intra-Afghan peace talks, and that more civilians than ever are being killed in this game of war and peace.

The U.S. Special Representative for Afghanistan Reconciliation Zalmay Khalilzad, expressed concern about the escalation of violence in Afghanistan, and blamed the Afghan government.

He said this, despite the recent Taliban attacks targeting the bases and checkpoints of the security forces and the civilians.

Khalilzad wrote in a series of tweets about the Afghan army attacking a gathering of Taliban fighters in Herat.

“In Herat, photos and eyewitness accounts suggest many civilians including children are among the victims of an Afghan airstrike. We condemn the attack and support an investigation.”

However, many social media users, reacted negatively to Khalilzad’s remarks and called him a spokesperson for the militants, criticizing his biased treatment of the Taliban.

Afghanistan’s geographical location and geopolitical characteristics have always made the country a battleground for proxy warfare, and there has long been a proxy war between the great world powers, regional powers and its neighbours.

Therefore, the concept of “proxy war” is familiar and tangible to the people of Afghanistan and they know very well what is meant by the term.

But the concept of “proxy peace” is rather new and unfamiliar.

On Friday, Rahmatullah Nabil, the former chief of the National Directorate of National Security, used the concept of proxy peace in Afghanistan on his Facebook page.

“The current situation in the country and the dangers for the future of Afghanistan, the actors, the nuts and bolts, and their hidden and obvious goals, have created a complex and miserable crisis in the country.  A crisis in which, unfortunately, the interests of actors and stakeholders in the name of the proxy war process and now proxy peace, are not the only solution.

Rather, it complicates the complexity and deepens the crisis.  Finally, as in the past, only the people of Afghanistan will pay the price for their lives.”

During his press conference on Saturday, Nabil once more said Afghanistan has become a victims of proxy peace.

“For a long time, we have been victims of a proxy war. Now it’s proxy peace — we are paying the price, but we have no say in the peace,” he said, and explained, “The Soviets departed, they left us war and Afghan-killing. Now it’s the same programme. The Americans came for counterterrorism. They are withdrawing but leaving the war and the Afghan-killing to us.”

Will the peace process, which originates from a deal between the U.S. and the Taliban, with the direct involvement of neighbouring countries such as Pakistan and other regional powers, end the current insurgency, establish lasting peace and security in Afghanistan?