Narratives » Security Incidents Mount in Daikundi; Why Has the Secured Province Faces Insecurity?

Security Incidents Mount in Daikundi; Why Has the Secured Province Faces Insecurity?

Daikundi is one of the relatively safer provinces in the central region of Afghanistan which has recently witnessed unrest in some of its districts.

Reports indicate that recently Taliban group had attacked on some outposts of security forces in the province from Uruzgan and Helmand province.

Taliban insurgents’ attacks continued regularly on some districts of Daikundi province. On 8th June, Taliban attacked a police outpost in Band-e-Zeyarat village in Pato district of the province, in which 6 police personnel were injured and another was killed.

In the meanwhile, when police special forces were sent to support, security forces were ambushed and as a result, a soldier of the forces was killed.

In July, Taliban carried on night attacks on security forces outposts in Pidgak and Sang Haidar Bek areas of Kajran district that claimed the life of 7 security forces and injured 16 others.

It has been reported that on 30th June, Taliban again attacked in this area. These two outposts are located in the border between Daikundi and Helmand province.

In the recent attack of Taliban insurgents in Daikundi, on 1st July an embedded mine exploded near security forces outpost in Kijran district but there is no report about the causalities.

These districts are mostly located in the Daikundi border areas of Helmand province, and according to some officials in Daikundi province, this area is often the target of the armed opposition.

The Roots of Insecurity

Speaking to Reporterly, Shaima Rustamian, the head of Daikundi provincial council said that one of the reasons for insecurity in Daikundi province is lack of coordination among security forces and local departments. She called on the central government to pay attention to the security situation of the province and emphasized that, “if the government doesn’t consider the current situation in the province, it is likely that the condition may get worse.”

Meanwhile, Sakina Ehsani, the spokesperson for Daikundi governor attributed the recent insecurity of the province to i sharing border with some districts and insecure areas of Uruzgan and Helmand provinces.

But, in contrast, Gul Aqa Sajadi, spokesperson of Daikundi police command told Reporterly: “There are more threats in the three districts of province, and the insecurity has increased when Pato district was established. Taliban commanders were there and upon the creation of the district they were forced to go to Gizab district in Uruzgan province, and then other Taliban groups collaborated with them to attack Daikundi province. ” 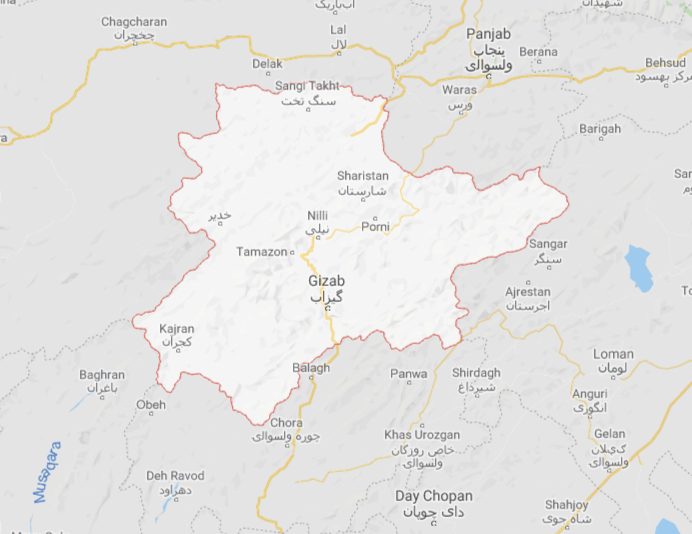 The Possibility of Collapse of the Districts

According to Daikundi local officials, serious threats are posed on three districts of the province. Some authorities say that Taliban insurgents are based in some homes in Kijran distict and are attacking security forces.

They say that if there is no air operation, the situation will continue to worsen and it is likely that Kijran, Nawamish and Pato districts might fall to Taliban.

However, Ms Ehsani, spokesperson for Daikundi Governor said that the situation is stable now. There are security threats of the enemy only in Kijran and Pato districts of the province and few nights back Taliban intended to attack in Seya-Chub area of Sang Takht district but the security forces attacked them prior to their assault, according to her.

Due to the fragile security situation, Daikundi province is now witnessing insurgents attacks and officials of the province are concerned about the mushrooming of these attacks. Given the fact that, Daikundi is a remote province of Afghanistan, it seems that before the situation deteriorates further, it is imperative that Afghan security institutions take serious measures to improve the security of the province.