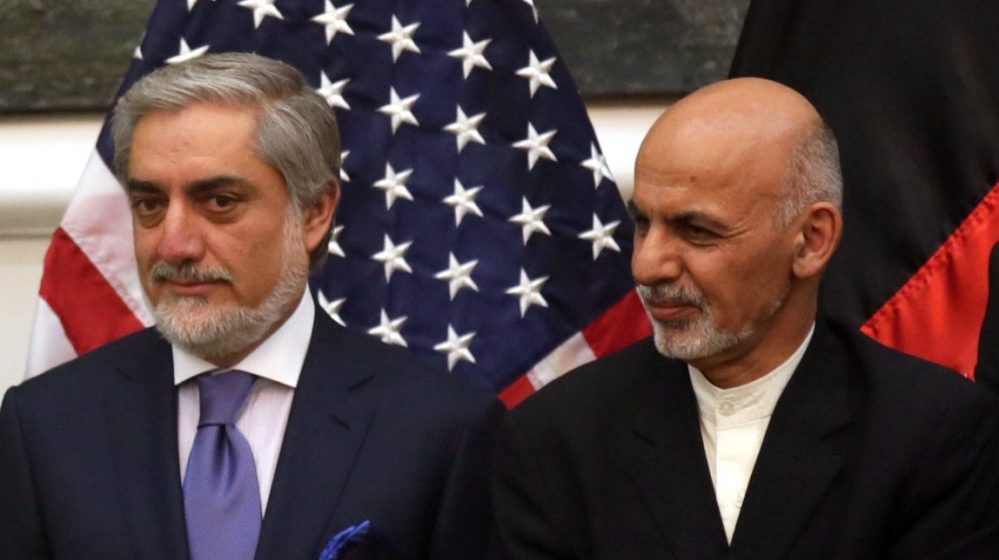 The Government Crisis in Kabul: Power Balance Between Ghani and Abdullah

According to one of Abdullah’s close associates, who declined to be named, the meeting was about the current political crisis in the country and the need for a reconciliation council.

Mr. Karzai and Mr. Sayyaf have previously made efforts to mediate between the Afghan rivals (Ashraf Ghani and Abdullah Abdullah), but so far have not yielded any results.

Meanwhile, the Afghan government under the presidency of Ashraf Ghani and in coordination with other political stakeholders, including Abdullah Abdullah, has finalized the list of peace talks with the Taliban.

As quoted by one of former Vice President Karim Khalili’s associates, during the finalization of the list of the Taliban’s negotiating delegation, Asadullah Sa’adati, the second deputy of Abdullah Abdallah, was introduced by Khalili as part of the government’s negotiating team, but Mr. Ghani didn’t accept the candidate. Other politicians, who themselves have sought membership in the negotiating body, have also been rejected by president Ghani.

Nonetheless, it seems that the none-government parties in alignment with Abdullah are somehow trying not to justify the peace process under Ghani’s leadership, which is an opportunity for Abdullah to balance his power.

The US Secretary of State Mike Pompeo, in a tweet posted on his Twitter page on Saturday, thanked Ghani and Abdullah as his counterparts for finalizing the peace talks with the Taliban and urged both of his Afghan counterparts to form an inclusive government.

According to diplomatic literature, neither Abdullah nor Ghani are either Pompeo’s counterparts, but his counterpart is the Afghan Foreign Minister. But again, Pompeo has thanked both Afghan presidents as his counterparts.

Mr Pompeo appears to have done so because he wanted to show Afghanistan’s political stance and remind the two sides of the power struggle in Kabul that they both have the same position for the United States.

Thus, Pompeo’s tweets indicate that Abdullah is also considered as a counterpart to American as Ghani is, and that the Americans, despite attending Ghani’s oath ceremony, cannot ignore Abdullah.

After the swearing-in ceremonies of both presidents in Presidential and Sapidar Palaces, Ghani practically has the power and resources of the government and continued the government’s affairs as president.

But on the other hand, Abdullah has received attention from countries involved in Afghan affairs and international institutions as before when he was Chief Executive of the National Unity Government. As in the latest case, UN Secretary-General Antonio Guterres made a condolence message yesterday over a telephone call to Abdullah Abdulah in connection with a terrorist attack on a Sikhs Temple in Kabul, and condemned the bloody attack.

Mr. Abdullah wrote on his Facebook page that, recalling the danger of coronavirus outbreak, Mr. Guterres has called on Afghan leaders to take urgent action and announced the UN’s readiness to assist the Afghan people.  Mr. Guterres also introduced the recently appointed Special Representative of the Secretary-General for Afghanistan, Ms. Dibra Lines.”

Kabul’s situation looks set to remain critical in the coming days and the issue of power balance (position of Prime Minister for Abdullah and the power sharing) between Mr Ghani and Mr Abdullah will remain unresolved.

This comes at a time as the country actually needs a genuine consensus and unity to tackle more serious issues such as the spread of the Coronavirus and the Taliban’s return to power.

But it seems that the priorities in Kabul are not the crisis of the spread of the Corona virus or the return of the Taliban, but is the power balance.