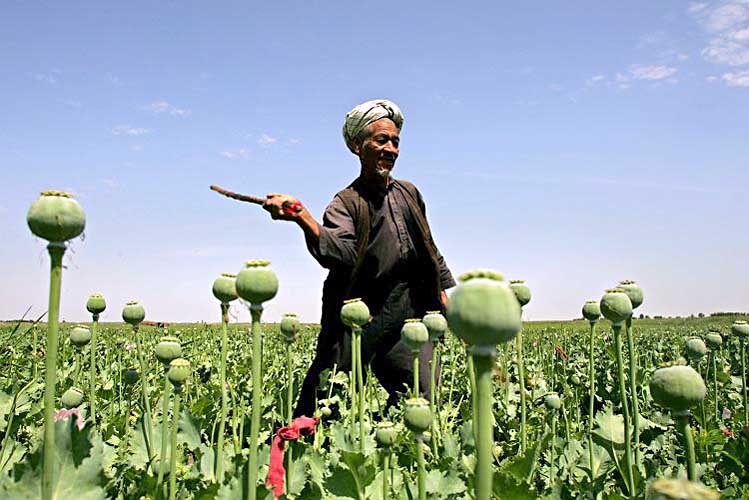 The findings of this year’s World Drug Report by UNODC, which was released this week, show that the overall productions further complicate the global picture of drug challenges, “underscoring the need for broader inter- national cooperation to advance balanced and integrated health and criminal justice responses to drug supply and demand”, Yury Fedotov, the Executive Director United Nations Office on Drugs and Crime said.

The World Drug Report 2019 registered a decline in opiate trafficking from Afghanistan.

The decline in the global area under opium poppy cultivation in 2018 was primarily a result of the decrease in opium cultivation in Afghanistan, which declined by 20 per cent across the country.

However, with 263,000 ha, 135 Afghanistan again accounted for the largest area globally under illicit opium poppy cultivation in 2018.

It was found out that the decline in opium poppy cultivation in Afghanistan in 2018 was mainly the result of a drought, low opium prices may have led to a decrease in opium poppy cultivationin provinces not affected by the drought. Over the period 2016–2018, opium prices in Afghanistan fell rapidly, probably as a consequence of overproduction in previous years.

The three main opium-producing countries (Afghanistan, Mexico and Myanmar) are estimated to have been responsible for roughly 96 per cent of the estimated global total opium production in 2018, with Afghanistan alone accounting for 82 per cent of that total.

It was also estimated that the global decline in opium production in 2018 was mainly due to result of a poor opium harvest in Afghanistan which has fallen by 29% and reflecting a 20% decrease in size of area under cultivation. Moreover, the drought has been an important factor in such a decline.

Despite the above, the prices of both opium and heroin continued to decline in 2018 in Afghanistan and Myanmar.

The largest amounts of heroin and morphine seized in 2017 were reported of Afghanistan, followed by Iran and then Pakistan. The illicit cultivation of opium poppy in Afghanistan dropped from 328,000 hectares to 26300 hectares from 2017 to 2018

However, the report still notes that area under cultivation in Afghanistan today is 60% more than it was a decade ago.

Additionally, the world’s single largest heroin trafficking pathway-the Balkan route, sees drugs smuggled from Afghanistan through Iran, Turkey and Balkan countries. Not just this, other routes of heroin are also taken Out of Afghanistan via Pakistan, Africa, and Central Asia.

In April 2019, the annual United States Government estimate of “Afghanistan Poppy Cultivation and Potential Opium Production” found poppy cultivation decreased in 2018 compared to 2017, but remained at a near record high.  Poppy cultivation in Afghanistan declined 33 percent, from 329,000 hectares in 2017 to 221,000 hectares in 2018.  Similarly, potential pure opium production dropped by 42 percent, from 9,140 metric tons in 2017 to 5,330 metric tons in 2018.  The decline in cultivation and potential pure production are attributed to large areas of drought in Afghanistan and low opium prices driven by a record 2017 crop.

The White House, in response to the findings stated that the continued large-scale Afghanistan poppy cultivation and opium production further complicates the government of Afghanistan’s ability to maintain rule of law and promote a road to peace.

It was pointed out that although heroin originating from Afghanistan is not the driving force of the United States opioid epidemic, drug revenue generated by the Taliban hinders its Counterterrorism and Counterinsurgency efforts and broader South Asia Strategy.