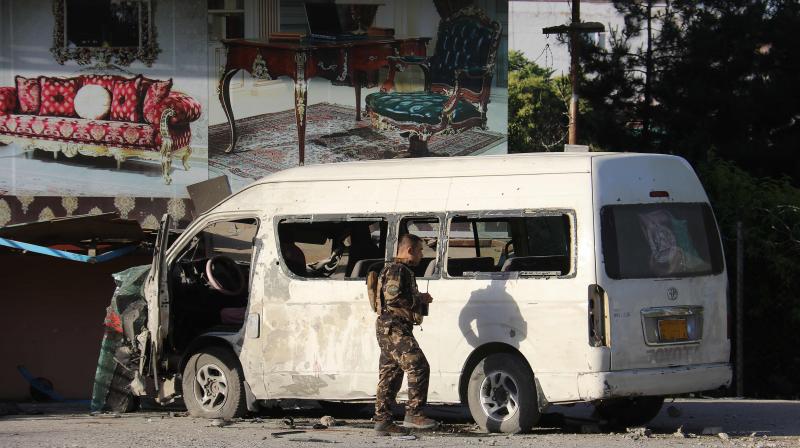 Who Were the Two Journalists of the IS Attack?

“Our colleagues Mirwais Shah Amiri, an economic reporter, and Shafiqullah Zabihi, an employee in the technical department, were martyred,” said the chief executive of Khurshid TV station. He lost his two employees to a roadside bomb explosion on May 31.

The two men were in a minibus that ferries the company employees in Kabul. There were eight passengers in the van along with the driver.

Zabihi, 20, and Amiri, 24, were the two employees who died in the blast. Photos showed a badly damaged white minibus. Six passengers were wounded in the IED blast which took place during evening rush hour, around 4pm local time, near the Traffic Square in Kabul. The driver was critically injured. He is in a coma, but the rest of the staff have superficial wounds.

The remote-controlled bomb was embedded in the roadside median and exploded when the car carrying the Khurshid employees drove past. The car spirally out of the driver’s control and hit a building.

Most of the passengers were injured when the car’s windows shattered due to the blast and the glass flew inwards.

Zabihi, who was sitting in the front passenger seat, was killed by the glass falling from the window and the windshield. Amiri also died from the glass pieces which went through his neck and heart.

The explosion comes eight months after a vehicle of the same TV network was hit by a roadside bomb in PD5 of Kabul.

Ramesh Nikzad, director of the technical department of Khurshid TV, told Reporterly: “In the incident which occurred eight months ago, we had six people injured, two of whom were seriously injured. However, thank God, they are all good and safe now.” However, things are different now. “This time we have two colleagues whom we lost for eternity.”

Nikzad has been on his way home that day when he heard about the bombing attack. He came to the scene and saw that Zabihi succumb first to his injuries. Soon afterwards, Amiri died due to excessive blood loss from the wound on his neck.

The phone that went unanswered

Mirwais Shah Amiri, 24, was the second son in a family of seven people. He had been working for Khurshid TV for four years. His hometown was in Mir Bacha Kot district.

Mirwais was a fresh graduate, having just completed his undergraduate degree two months ago.

“A person graduates from university and wants to have a job to support his parents. Regretfully, he was martyred before taking his diploma,” his father, Mir Taher Shah Amiri said.

The middle-class family has been shocked by the incident. Mirwais’s mother is suffering greatly, his father said. “You know what a mother does when she loses her child.”

The last time the father and son spoke was the day before, on Friday evening. When Taher had enquired whether Mirwais was home, he had said he was out meeting friends and would play volleyball with them. It was Friday after all.

Every day at 5pm, Mirwais would receive a call from Taher while on his way back from work. His father would check to ensure Mirwais reached home safely. On May 31, when the call came, no one answered.

The next day, Taher heard from a friend that a car carrying employees of Khurshid TV had been targeted.

They called him, Taher recounts and said, “Do you know about your son? The car hit an IED.”

Taher told Reporterly, he tried calling on his work number, but no one was responding. The panicked father then tried the personal number. “I knew he will never leave calls unanswered from home. Wherever he was… in front of a minister, lawyer, he would pick up the phone and say, ‘I am interviewing right not. I will call you again.’ But he didn’t answer that day.”

The panicked parents then asked a friend to take them to the hospital where the other blast victims were. “Then I found out he had been martyred.”

Shafiqullah Zabihi, 20, had just graduated from school. He was the eldest child in the family of four. His hometown was in Shakardara district.

He wanted to study medicine, but due to the outbreak of Coronavirus and then the lockdown, medical entrance exams had been postponed. He decided to prepare waiting for condition to return to normal.

Shafiqullah had worked in the technical department of Khurshid TV for three years and was the family’s main source of income. There’s was a middle-class family.

His father, Assadollah Zabihi, had been an employee of the National Directorate of Security. An organisational misconduct charge in 2003 saw his employment getting terminated. He had been unemployed since.

Assadollah described his son as a calm and steadfast boy who was well aware of his responsibilities.

He had spoken to his son the previous night. “I called Shafiqullah and told him that he had not come home, and he replied that he was on shift tonight and would come home tomorrow.”

However, that day never came. “He died on the way home and I lost him forever.”

Assadollah was informed of the explosion via a phone call. He rushed to the hospital where he found out about his son’s death.

Shafiqullah’s mother is also sick and has been receiving treatment.

The international community has condemned the attacks and said the perpetrators need to be brought to justice.

The President’s office called is a “terrorist” attack.

The U.S. Embassy in Kabul tweeted: “We condemn the vicious attack that killed two employees of Khurshid TV. Attacks on the media are attacks on Afghanistan’s freedom and progress. Our deepest condolences to the families of the victims. We stand with free media and are working hard for a peaceful Afghanistan.”

But Kabul-based journalists have said such incidents would soon be forgotten and never investigated.

“Just as other incidents that happened against big media outlets in Afghanistan are forgotten–we are not different from them. I am sure this incident will be forgotten once again,” said the head of Khurshid TV.