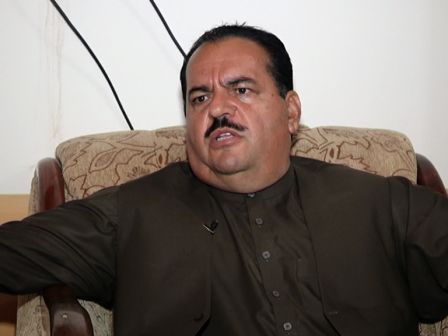 Abdul Jabbar Qahraman also known as “Jabbar Khan” and nicknamed “Qahraman” was the son of Muhammad Hassan. He was born in “Spin Boldak” area of Kandahar province in the solar year of 1958/1959. He received his bachelor degree from military academy in the early 60s and immediately joined the People of Democratic Party of Afghanistan. Jabbar Khan was one of the former military veterans in Afghanistan who played a crucial role in the 16th round of parliament for eight years. 60-year old Jabbar had a key role in supporting the People of Democratic Party in southern part of the country.

At that time, Jabbar’s center of command was the Helmand province, particularly the “Garmsir” and “Rig” or “Dishu” areas in the south of Helmand, but the scope of his militias’ activities arrived in Farah and Kandahar.

During the 60s, forces related to Jabbar mainly had the responsibility for the security belt of Lashkargah city, the center of Helmand province. At that time, Jihadi commanders like Mawlavi “Nasim Akhonzada”, Mawlavi “Ghafar Akhonzda” and “Abdul Wahid” also known as “Raees Boghran” were considered as the rivals of Jabbar Khan. The operational areas of these Jihadi commanders were the southern parts of Helmand province, such as “Nawzad”, “Musa Qala”, “Sangin” and “Boghran”. Although there had been intense conflict between Jabbar Khan and these three Jihadi commanders, in the late years of Dr. Najibullah’s government, an unwritten peace accord was signed between them.

As mentioned before, the activity areas of Jabbar Khan’s were not limited to Helmand province, but Maiwand district of Kandahar was one of the other areas where Jabbar Khan had a wide influence.
This high-ranking officer of the Najibullah government was among those people who played a key role in getting “Esmay Muslim Achakzai”, a commander of Mujahiddin of Kandahar to surrender to that government.

When Dr. Najibullah’s government collapsed, Jabbar khan, like many other commander of Najib regime, delivered Helmand province to its rival armed groups, such as the Mawlavi Nasim group, Mawlavi Ghafar and Raes Baghran. He returned to Afghanistan after the fall of Taliban and entered Parliament as the representative of Helmand a few years after the electoral disputes.

Two years ago, Ashraf Ghani sent Jabbar Qahraman as his representative in Helmand province to manage the security issues there which he had failed to do so. Ashraf Ghani thought one’s background would play a key role in security provision while not knowing that it had been a while since Afghanistan moved beyond the traditional boundaries and had entered a new phase of social reality. Therefore, simultaneous with Jabbar Khan’s arrival in Helmand, Afghan national security forces handed many districts like “Nawzad”, “Musa Qala” to the Taliban. As soon as Jabbar Khan entered Helmand he stated that according to his strategy the conflict would soon be on decline, but his strategy backfired with the passage of time. Last year, to save his reputation and put the blame of his failure in Helmand on someone else, he accused president Ashraf Ghani of being mean, adding that the president did not have the ‘chocolate’ like president Karzai had to absorb people around him.

Jabbar Qahraman, during the last few years was also famous as one of Hezb-e Watan or Watan party leaders. After president Najibullah rose to power, the name People of Democratic Party of Afghanistan was changed to Watan Party and Dr. Najibullah himself became the leader of it. After Dr. Najibullah’s ouster from power by Mjujahidin, the party was dissolved. After Taliban regime ended, the party got its license of activity from Hamid Karzai’s administration but did not have any significant activity. Over the last two years, once more there were some activities and fervor seen among the ex-communists and the members of the party so one of its gatherings was held last year in Kabul on July 28th. Jabar made a speech in the gathering and proved that he could have a place among the supporters of Watan party. In the upcoming parliamentary election he nominated himself from Helmand province and he was busy campaigning fiercely for the last few days. At last, this morning, a Wednesday, October 17th, a bomb targeting his campaign office exploded in Lashkargah of Helmand, killing Jabbar Khan, thus ending his life of adventure which was replete with ups and downs.