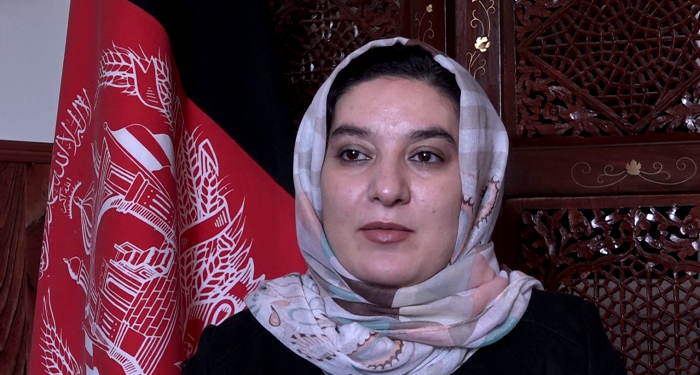 Since Wedneaday, a short video clip of an informal conversation between the Operational Deputy of IEC, Wasima Badghisi, and the secretary and Spokesman for IEC, Sayed Hafiz Hashemi, is being circulated among Afghan social media users.
These two members of the election commission, who did not realize that their microphones were operational were discussing the electoral challenges.

According to Ms. Badghisi, this video was probably recorded by a journalist on 20 October (the first day of election) and then posted on social media subsequently.

“Today, a part of my personal and informal conversation on 20 October was broadcasted on social media by a journalist who recorded the conversation.
This short video clip, in which no illegal and immoral words were stated, has been viewed more than 30 thousand times and shared hundreds of times.
In this conversation, there has been no discussion of classified information and no news has been reported. But the electoral and the political climate of the country, especially on social media, has caused the video to go public and viral due to the lack of professionalism,” the statement read.

The statement continued,
“Journalism and respective laws require that the case be treated professionally, and the permission and awareness of the subject persons are taken into account, rather than posting a video which is merely an informal conversation between two colleagues and disregarding its contents, originality and journalism work ethic.

It’s natural that the contentious and judgmental atmosphere of social media makes this short video and its contents twisted.
The content of this conversation was not something to be hidden, and all of us today realize that information flow on social media has its own intense controversy.

Kabul elections were faced with challenges more than any other province. On election day, some polling stations remained closed and as members of IEC, we were faced with challenges even more.
What was the reason that some of the centers remained closed, some people returned to their homes?
These electoral challenges in Kabul questioned the positive performance of the commission in the election like the use of various methods of deterring fraud, voting of people based on a predetermined list, the use of government employees and teachers for election day in order to reduce costs and the turnout of millions of people on the streets of Kabul.
I pointed out in that video clip that if we are not decisive and united, we will fail against those who created such problems. As you know, there are people who are there to disrupt the election.
Secondly, the president, Mohammad Ashraf Ghani, issued a statement regarding the successful completion of the election. As I was aware of the election problems in Kabul, I wanted to know how the election has been seen by the president.
Because I was unable to hear the statement due to my tight schedule, on Wednesday 24 October, I requested my colleague about the impression of the United Nations special representative Mr. Tadamichi Yamamato, who had come to the commission, on the election day (as I was not present at that meeting either).

Governments and international partners are the electoral partners as well. Their response and reaction in the early hours after election with respect to the commission’s performance are very important and meaningful to IEC.

My conversation was describing a normal situation just like every other citizen, but unfortunately, some have misinterpreted that as something that has nothing to do with my talk. My worry about broadcasting that video is that it clouds public opinion about the national election process.”

(Signed)
Wasima Badghisi
Commissioner and operational deputy of the IEC