Kabul: The Shanghai Cooperation Organization (SCO) foreign ministers have called on the conflicting sides in Afghanistan to abstain from using force or taking steps that can lead to destabilization in the republic’s border areas, a joint statement signed by the ministers on the outcomes of the SCO-Afghanistan Contact Group meeting on Wednesday informs. "We strongly call on all sides involved in the conflict in

Kabul: Following the fall of a number of districts in the country to Taliban fighters, Ajmal Omar Shinwari, a spokesman for the armed forces, said that the lost areas would soon be recaptured. Shinwari told a news conference in Kabul on Wednesday that a clearing plan had been drawn up to reclaim the lost sites and that "we will see the recapture of these

Kabul: Minister of Justice, Fazel Ahmad Manavi, went through the status of legal awareness of citizens and stressed on the need for change in this area. The meeting, which was held on Tuesday, was attended by the Deputy Minister of Social Affairs of the Ministry of Justice and a number of heads and officials of various directorates of the Ministry. The Minister of

Kabul: The International Conference entitled, Central and South Asia; Connectivity Summit, is scheduled for July 15-16 in Tashkent, the capital of Uzbekistan. Latif Mahmoud, the deputy spokesman for the Presidential Palace, told the Hashte Subh daily on Wednesday, that President Ashraf Ghani will also attend the meeting. According to Mahmoud, the Tashkent International Summit will be attended by representatives of 40 countries, including the

Kabul: The Ministry of Public Health (MoPH) announced on Wednesday that it has recorded 1,210 new cases of the coronavirus (COVID-19) infection and 60 deaths in the last 24 hours. 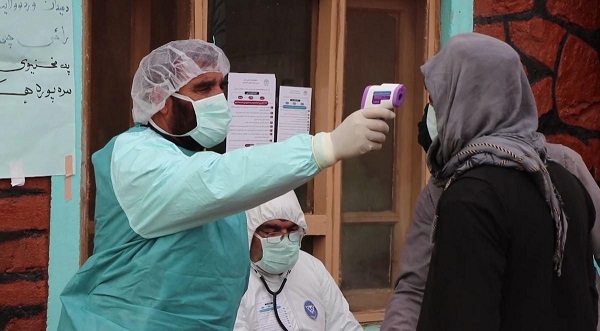 The total number of positive cases in Afghanistan now stand at 137,853, while the death toll is 5,983. This comes even as the third wave of the

Kabul: Minister of Foreign Affairs of the Islamic Republic of Afghanistan Mohammad Haneef Atmar met, on the sidelines of the fourth meeting of the Afghanistan Contact Group within the framework of Shanghai Cooperation Organization, with Indian Minister of External Affairs Subrahmanyam Jaishankar to discuss political and security situation, peace process, and India's cooperation with Afghanistan in various fields, including the joint fight against