Kabul: The Afghanistan Meteorological Department (AMD) warned of the possibility of heavy rainfall and floods, thunder, and storm across Kunar, Nuristan, Panjshir, Parwan, Kapisa, Baghlan, Samangan, Bamyan, Kabul, Laghman, Nangarhar, Badakhshan, and Logar provinces, on Sunday and Monday. The AMD has forecast rainfall of 10-20 millimeters in various parts of the aforementioned provinces. In other news, the 6th exhibition of domestic products under the banner

Kabul: Local officials in Badghis province reported that Taliban attack on the outskirts of Qala-e Naw district, the provincial capital, was repulsed. Provincial Governor Hesamuddin Shams told Radio Azadi that 11 Taliban insurgents were killed and nine others were wounded, during the clashes, whilst two civilians were also killed as a result of Taliban’s mortar attack. A local source, who asked to remain anonymous, 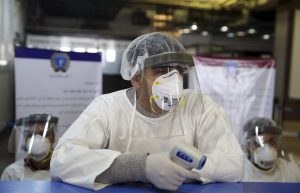 Kabul: The Ministry of Interior (MoI) on Sunday rejected Taliban’s claims of having captured districts. MoI Spokesman Tariq Arian stated that the ANDSF have temporarily shifted from one area within some district centers to another area, which is not meant collapse of these districts. Arian said that the Taliban are unable to keep a district or use any vehicles they claim to have captured,

Kabul: Afghanistan has unveiled a new visa policy months after Pakistan had announced a new liberal visa policy for Afghan nationals that include long-term visas with multiple entries for businessmen, students, families, tourism and medical visas. “The Islamic Republic of Afghanistan has introduced a relaxed visa regime for Pakistani citizens as a goodwill gesture and economic, social, cultural and expansion of relations between Pakistan

Kabul: The civil aviation authority of Afghanistan said in a statement that the radar and VSAT systems guiding flights from Bagram airfield and Hamid Karzai International airport reactivated. Both the systems were deactivated before Resolute Support vacate the Bagram airbase in the north of Kabul. It comes after local residents of the Bagram district of Parwan province started plundering the military base soon after