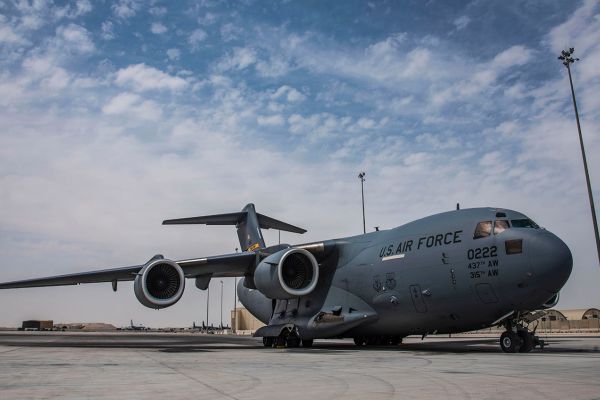 60 Planeloads Of US Equipment Out Of Afghanistan: Pentagon

Kabul: With the retrograde mission underway, at least 60 US Air Force C-17s have moved out of Afghanistan carrying equipment and other material ever since President Joe Biden on April 14 announced the end of the war in the country, said US Central Command in a statement released on May 1.

Additionally, over 1,300 pieces of equipment have been turned over to the Defense Logistics Agency to be destroyed, added the statement and at least two and six percent of the entire retrograde process has been completed. The movement of equipment comes even as US forces in Afghanistan handed over one facility, New Antonik, to the Afghan National Army.

Meanwhile, the peace process is underway with Zalmay Khalilzad, the US Special Representative for Afghanistan, conducting rally meetings with important stakeholders of the Afghan peace. On Tuesday, he met Tajik President Emomali Rahmon and the two sides discussed various aspects of the current situation in Afghanistan, in particular the peace and stability process in the country, as well as regional and global issues.

In the meeting, Khalilzad said that Afghanistan is a bridge between Central Asia and South Asia, and that peace and stability in the region are crucial for the development of trade and the transportation of goods and products to Tajikistan and other Central Asian countries. The two sides stressed that Tajikistan, using all available capacities and opportunities, will continue its efforts to help resolve the Afghan issue and the country’s economic and social reconstruction.

However, as the withdrawal continues, the Taliban has increased its attacks on both Afghan forces and locations with US forces, including a May 1 rocket attack on Kandahar Airfield. Pentagon spokesperson John F. Kirby, in a May 3 briefing, said that the US has seen “small, harassing attacks”, but it did not have any “significant impact” on personnel or resources. Last week a report from the Special Inspector General for Afghanistan Reconstruction said 115 security personnel were killed and almost 40 were injured in fighting over the first three months of 2021 — an increase of more than 80% compared to the same period last year.
In fact, other regional players like India and the EU have also condemned the violence. In a joint press statement on Afghanistan, released on May 4, by the Indian External Affairs Minister, Dr. S Jaishankar and the EU High Representative for Foreign Affairs and Security Policy/Vice-President of the European Commission, Josep Borrell, they firmly condemned the unacceptable level of violence perpetrated against the national forces of Afghanistan and civilians and the targeted assassinations of civil rights activists, media persons and Ulema. They reiterated their call for an immediate, permanent and comprehensive nationwide ceasefire and reaffirmed their strong and continued support to an inclusive, Afghan-led, Afghan-owned peace process.

As representatives of the world’s largest democracies, External Affairs Minister Dr. Jaishankar and HRVP Borrell reaffirmed that any political settlement in Afghanistan must protect the human rights and fundamental freedoms of all Afghans, including women, youth and minorities, and build upon the economic, social, political and development gains achieved since 2001 under a democratic constitutional framework. Concluding, both sides reiterated the importance of ensuring that the soil of Afghanistan should not be used by terrorist groups to threaten the security of India and the EU.

Reaffirming that security in Afghanistan is intrinsically linked with security in the region, External Affairs Minister Dr. Jaishankar and HRVP Borrell agreed upon the need for Afghanistan’s neighbors and regional stakeholders to be active and honest facilitators in promoting a lasting, stable and peaceful resolution of the conflict.