It has recently become a matter of concern for organizations and people that despite Afghan women having come a long way in attaining, exercising and enjoying their rights after the fall of Taliban, their role in Afghanistan’s peace process needs more attention and weight.

Even the United Nations Secretary General Guterres on 25th October in an address pointed out how “crippling it is to our credibility and protection capacity that women represent only four percent of our military peacekeepers and ten percent of police,” while he talked about women’s participation in peace building in general.

But determined to work on the gendered context of peace building, Mr. Guterres announced that “Finally, from now on, I will include gender analysis in my reports to this Council whenever it is relevant to inform your decisions,” while speaking at the Security Council debate.

The United States Institute of Peace has also published a work by Marjan Nahavandi which reflects the need for women’s greater role and participation in the peace process for Afghanistan’s stability, “The meaningful inclusion of Afghan women in different phases and levels of the peace process will result in a more inclusive process and lasting agreement, which ensures that women’s recent gains are not lost. With efforts underway to jump start the peace process, it is up to Afghan women leaders to demand a seat at the table to ensure they have a significant role in the most important process in the modern history of their country.” 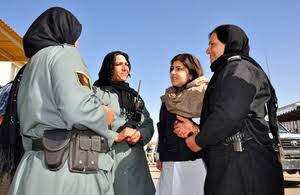 However it was clearly pointed out that the lack of this female participation may be due to factors like shortcomings on the part of the Afghan government and international community. Additionally, Mr Nahavandi believes that the burden of participation falls on Afghan women themselves and they have to make strategies of their own.

The peace process notwithstanding, UNAMA, earlier this year in a press statement made it clear that female Participation is crucial for the parliamentary as well as presidential elections too. And better still, women’s voter turnout in these parliamentary elections were reportedly impressive although an official count is yet to come out. This highlights the sheer embodiment of bravery and democratic spirit that the women of Afghanistan reflect.

Afghanistan is indeed witnessing a betterment in the condition of its women, but there is still a lot of room left for their role and agency.

And it is not as if Afghan women are not strategising. For instance there is the Afghan Women’s Symposium that is held every year in Afghanistan and aims to address issues ranging from education, health, economic empowerment to gender equality in workplaces and domestic life.