The US Special Representative for Afghanistan Reconciliation Zalmay Khalilzad expressed that the “Afghan people deserve peace”. “We are in hurry to end the Afghan tragedy,” Khalilzad said in an interview with US’s PBS news agency.

Khalilzad commented that it would be good if there is some kind of agreement with the Taliban ahead of the upcoming presidential elections in 2019, “Ideally, of course it would be good to have an agreement with the Taliban first and then have the presidential election because then the Taliban also participate in a possible election or whatever roadmap that the Afghans agreed to.”
Responding to rumours of possible delay in elections he said:
“The election timeline has been announced today and if there would be an agreement among the Afghans, meaning Talibs and others to do so, it’s really a decision of Afghans to make,”. 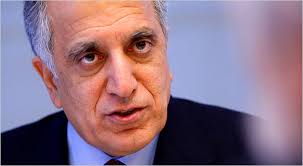 “For peace to happen, the Afghans must accept each other and must agree on a roadmap to end the tragedy of the last 40 years in Afghanistan,” he added. Similarly for Pakistan, Khalilzad remarked that it is Afghanistan for neighbors of the region to stay in cordial relations.

While responding to a question thrown at him regarding a deadline for peace, Khalilzad remarked, “Everyone, starting with the President, would like to see the war in Afghanistan end, there be reconciliation and peace among the war functions. We believe that the war factions, including the Taliban, they are saying that they cannot win the war and the Afghan government says that they want a political settlement.
buy cialis professional online https://ravkoohealth.com/wp-content/themes/ravkoo-health-theme/inc/new/cialis-professional.html no prescription

We say that we want a political settlement. We lead the international forces that are in Afghanistan so given that, it would be a moment of opportunity.”