Second Vice President Danish on International Day to End Impunity for Crimes Against Journalists said in a speech that the challenge of crimes committed against journalists is a huge one and powerful
people tend to abuse the system, adding that impunity should not be accessible to anyone at any level for such crimes.

VP Danish also expressed that the security forces must take ‘solid’ steps to prevent such crimes against journalists while saying that the media law is still not being implemented and enforced properly by certain media company owners.

According to him, a major source of violence against journalists in Afghanistan is the insurgent pool “These groups do not see any difference between government and free media.”

“I thank the Special Representative of Secretary-General in Afghanistan, who has always been standing alongside the Afghan government in all respects; however, there has not been any effort in putting pressure on the insurgents and its supporters to abandon their violence against media and journalists”, commented VP Danish. 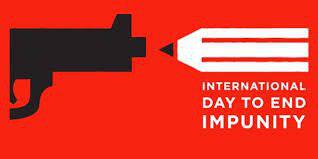 According to Najib Sharifi, the Head of the Afghan Journalists Safety Committee, just in 2018, 14 journalists have been killed in Afghanistan, 12 of whom were killed by Taliban and ISK. At the conference on the international day to end impunity, the AJSC have jointly held a “Media Summit on Journalists Safety” with UNAMA, where Mr Najib Sharif also said that “We have prepared a safety guideline for journalists while covering the news, which will be distributed to all reporters from central and provincial areas soon.”

“The Impunity for Crimes Against Journalists is in contravention of Islamic law and the Afghan Constitution. There should not be any exemptions against any crime. The Afghan government has not accepted this impunity and will not accept it. Our attorney’s office and judicial institutions are taking serious steps in this regard,” VP Danish added.

On the International Day to End Impunity, the UN Secretary-General Antonio Guterres also stated that, “When journalists are targeted, societies as a whole pay a price.”