Addressing a meeting with parliamentary election candidates, Gulbuddin Hekmatyar, the leader of Hizb-e-Islami, said that “in a meeting with president last night we agreed that the presidential election would be held in time. We hope that the president will remain loyal to this promise” while adding that, “We have no other way out of the current crisis than holding elections in a timely manner.”
This remark comes after reported proposal of Washington to postpone Presidential elections of April 2019.

Hekmatyar also insisted that the cabinet of the future Afghan government be formed on the basis of the influence of the parties.
buy levaquin online http://www.biop.cz/slimbox/extra/new/levaquin.html no prescription 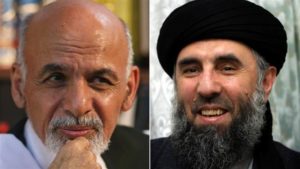 On the current scenario of security and crisis, he expressed that he believes powerful people are ‘inciting the war’ and forcing people to take up arms against government, saying people within the government also have a contribution in this.

A few days back, the Jamiat-i-Islami party announced that their format of presidential government system would be to include a prime ministerial position as well. To this, Hekmatyar expressed that the “announcement to have prime minister runner in their ticket for upcoming election is unjustifiable.”

Finally, the Hizb-e-Islami leader pointed that “those who want change in this country should support a candidate that is not affiliated with one party. If we choose a candidate supported by our international partners, the crisis and war in Afghanistan will continue.”