Only one in five Afghans have confidence in the integrity of the country’s elections, according to a US-based pollster, Gallup’s survey, which was released on Thursday.

The poll was conducted in July this year and it concluded that 19% of Afghans expressed confidence in the honesty of the country’s elections, while the majority (76%) believed the otherwise.

“Mistrust in the country’s electoral process rose sharply after the 2014 presidential election, which was characterized by widespread voter fraud that contributed to a three-month political stalemate,” Gallup said.

The Gallup poll also showed that only 13% say that they feel safe enough walking alone in their area at night, which is a major deviation from the 2016 figure of 36%. This is because the people feel that their security has been eroded.
buy acyclovir online https://farmerslabseeds.com/wp-content/themes/pridmag/inc/dashboard/css/new/acyclovir.html no prescription 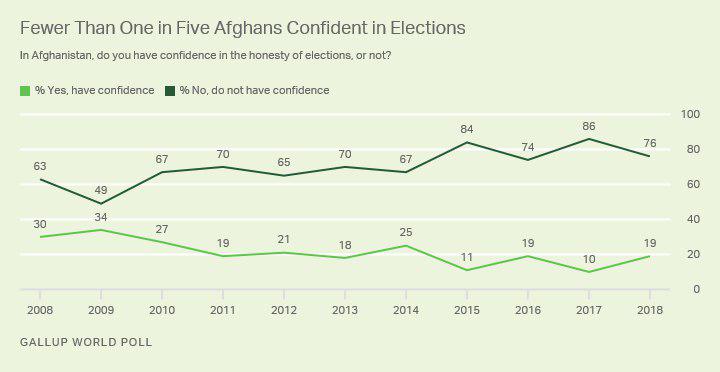 Disturbingly, Afghans’ confidence in the nation’s security forces has also fallen sharply over the past two years as the Taliban has seized several territories leading to increased civilian casualties. Confidence in the country’s military has fallen to 49% this year whereas it was an impressive 76% in 2016, according to the survey. Even the trust in police forces has seen a decline, as the poll recorded that only 22% of Afghans have trust and confidence in the police.

Earlier this week in Afghanistan, many security forces including policemen lost their lives to attacks and even parliamentary candidates and their supporters became the target of violence. The concerning part about the survey is that it was conducted before any of these incidents took place.

Gallup team says that an 87% trust deficit figure for ‘feeling secure and safe’ is the lowest that they have recorded for any country barring the poll for Venezuela.

The upcoming elections will be a test for the perseverance and ‘resolve’ of voters, as well as for the security forces. Fear stands out as a strong determinant in this survey.