In a bid to take things forward with another phase of the peace process, the Afghan government has come up with a comprehensive peace plan. It is due to showcase this plan at the Geneva Conference today.

The Afghan government wants to sought a peace agreement in which the Afghan “Taliban would be included in a democratic and in- clusive society”, but only if the Taliban respects and adheres to basic tenets and rights like:

One, The Constitutional rights and obligations, of all citizens, especially women, are ensured.
Two, The Constitution is accepted, or amendments proposed through the constitutional provision.
Three, The Afghan National Defense and Security Forces and civil service function according to
law.
Four, No armed groups with ties to transnational terrorist networks or transnational criminal organi-
zations, or with ties to state/non-state actors, seeking influence in Afghanistan will be allowed to join the political process.

The Afghan government has insisted on sustainable peace, and achieving such a peace whilst Afghanistan stays a sovereign and independent nation.

The statement by the government demonstrated that the government has, in the past 8 months deliberated and discussed the matter of peace with various stakeholders and representatives and the conclusion has been that:
A negotiating team, led by presidential chief of staff Salam Rahimi, has been established to
negotiate peace with the Afghan Taliban. The team includes women and men who have the
necessary credentials to deal with the key challenges of peace negotiations.
2) To ensure consensus and to provide direction to the negotiating team, diverse groups of indi-
viduals comprise a new presidential advisory board that will provide timely advice on critical
issues during peace negotiations.
3) The High Peace Council, based on their own request and with support from the NUG, will be
restructured to focus on public awareness and provide advice regarding post-peace scenarios.
4) The government will proceed with a five-phase approach, commencing with an intra-Afghan
dialogue, followed by discussions with Pakistan and the United States, followed by participa-
tion of regional actors, the Arab-Islamic world, and finally, NATO and non-NATO countries.
5) Negotiations will prioritize implementation, confidence-building measures such as time con-
straints, and the agreement on a method of ratification of a peace settlement. 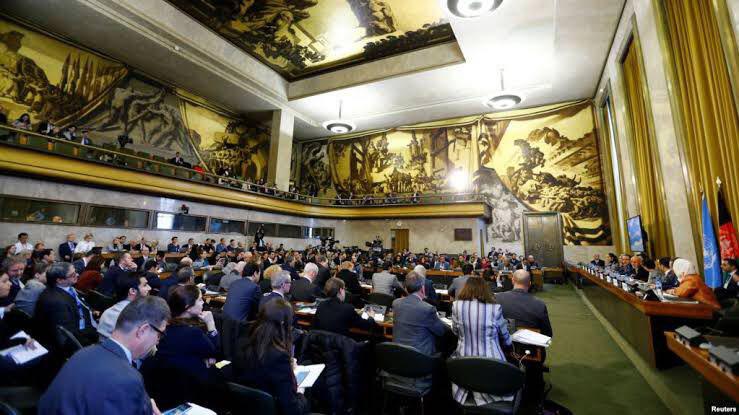 The government also assured and reiterated about successful Presidential elections of 2019, “The Afghan people need an elected government with a mandate to obtain ratification, implement the peace agreement, and lead the societal reconciliation process. “

Finally, the statement insisted on the final stance of the entire peace process and post-peace process being Afghan-led and Afghan-owned, “An imple- mentation plan for a post-peace Afghanistan, prepared jointly with the international community, will allow the government to marshal national, regional and international resources and capabilities and secure the international and regional guarantees required to sustain peace. Particularly, the Afghan government and people emphatically request all of our neighbors to fulfill all their obligations under UN conventions against terrorism. The peace process must remain Afghan-led, and the government requests its partners to play a key supporting role.”