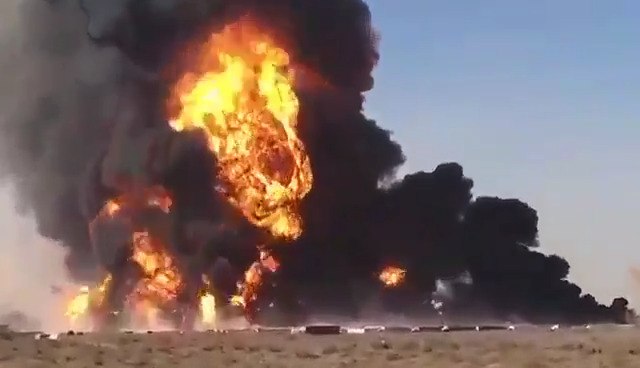 A day after a massive fire which as broke out at Islam Qala port of Herat province, local officials say human error was the cause of the fire.

Jilani Farhad, the spokesman of Herat province on Sunday said that about 2,500 loaded vehicles have been evacuated and the danger removed.

Farhad added that the fire is still ongoing and serious efforts are underway to completely distinguish it.

He noted that 17 people have been injured and transferred to the hospital and a large amount of property belonging to traders and the private sector had been set on fire.

“We were told that 100 or 200 tankers have been destroyed, but this number could be higher. We need more time to find out the extent of the damage,” Jailani Farhad, said after visiting the scene.

Younus Qazi Zada, the head of the Herat Chamber of Commerce, on Saturday said initial estimates were of “millions of dollars of losses”.

Large parts of Herat province were without power on Sunday.

Islam Qala is one of the major ports in Afghanistan, through which most official trade with Iran is conducted.

Iran foreign ministry spokesman Saeed Khatibzadeh said the border “was held open for trucks, cars and people running from the fire” towards Iran.

Afghan authorities called on Iran for help after saying it did not have the required resources to tackle the blaze alone.

Fire services from both countries were at the scene extinguishing small fires that still remain, Farhad said.

He added that Taliban insurgents attacked a nearby security post shortly after the blaze broke out.

Security forces have been deployed around the port to prevent any looting.