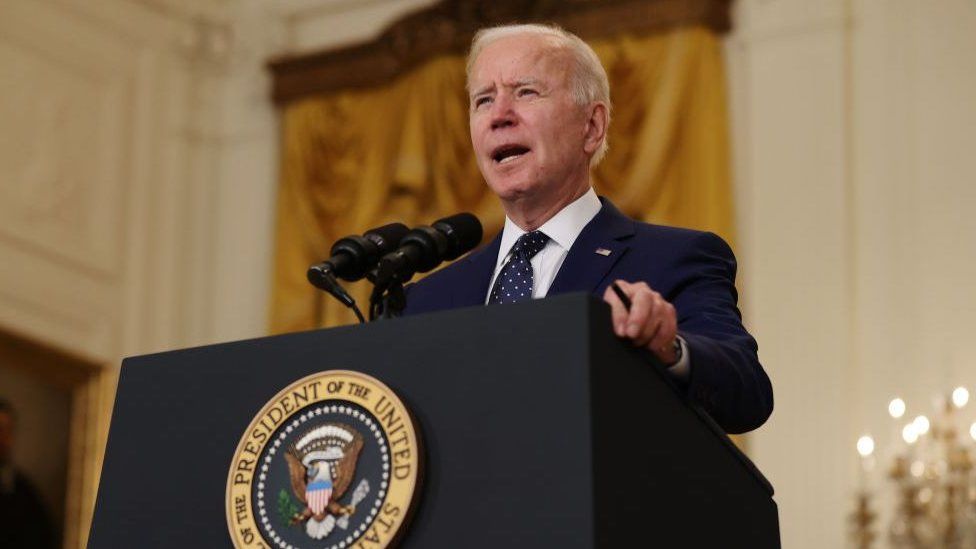 Kabul: Marking an extremely symbolic 10th anniversary of the killing of one of most dreaded terrorists in the world, Osama Bin Laden, on Sunday, US President Joe Biden said that the Al-Qaeda has been “greatly degraded” in Afghanistan. This comes even as the US and NATO troops have formally begun their withdrawal, which will last till September 11, from the war-ravaged nation nearly 20 years after the then president George W Bush declared war on terror.

Osama who claimed to be the mastermind of the 9/11 attacks, was killed in a 2011 SEAL team operation in Pakistan on May 2. “We followed bin Laden to the gates of hell—and we got him,” Biden said. His elimination, however, did not bring peace to the Middle East region, even after 20 years of the US fighting in Afghanistan. Now, US plans to end the “forever war”, saying they have achieved what they wanted- eliminate Osama and degrade Al-Qaeda.

“As we bring to an end America’s longest war and draw down the last of our troops from Afghanistan, Al-Qaeda is greatly degraded there. But the United States will remain vigilant about the threat from terrorist groups that have metastasized around the world. We will continue to monitor and disrupt any threat to us that emerges from Afghanistan. And we will work to counter terrorist threats to our homeland and our interests in cooperation with allies and partners around the world,” Biden added.

However, security experts and even some of Biden’s top generals are wary of leaving a vacuum in Afghanistan, which could be occupied by destructive forces, leading it to become a terror haven again. Such circumstances will lead to the country again becoming a hotspot of terror activities and the mission which US took up, will remain defeated. In fact, though al-Qaeda’s influence in the country has faded, the Taliban is still very much active. Clashes continue in Afghanistan between Taliban insurgents and the Afghan military, despite the launch of peace talks between the movement and Kabul in Qatar’s Doha last September. Hillary Clinton too warns of potential collapse of the Afghan government, civil war and a largely Taliban-run government at some point in the not-too-distant future, amid US troop withdrawal from Afghanistan.

However, the Biden administration seems firm in its belief and even US Secretary of State Antony Blinken reiterated on Sunday that there will still be US presence in Afghanistan after the pullout of American forces is completed, quelling fears that without the presence of foreign troops Afghanistan will not be able to defend itself alone.

“We’ve been engaged in Afghanistan for 20 years, and we sometimes forget why we went there in the first place, and that was to deal with the people who attacked us on 9/11. And we did. Just because our troops are coming home doesn’t mean we’re leaving. We’re not,” Blinken said.

Blinken added that the US embassy will remain in Afghanistan and the US will continue providing economic, humanitarian, and developmental support in the country.

When asked if the Taliban could end up taking over in Afghanistan, Blinken said, “We have to be prepared for every scenario and there are a range of them.”

Last week, White House Principal Deputy Press Secretary Karine Jean-Pierre confirmed that the US had started to pull out forces from Afghanistan. The US has deployed four B-52 bombers, an aircraft carrier and even additional forces to help in the retrograde mission as the Taliban had warned of more violence and threatened to abandon the peace talks. The Taliban believes that the US has violated the Doha agreement by extending the May 1 deadline of troop withdrawal to September 11.

Meanwhile, the peace process saw a lull period before gaining momentum this week again. After the extended troika meeting which urged both warring factions to look at a political settlement, US Special Representative for Afghanistan Zalmay Khalilzad said last week that after the withdrawal of American forces there is a possibility that UN peacekeepers would be deployed in Afghanistan.

In fact, the National Islamic Movement of Afghanistan party said that Zalmay Khalilzad, the US Special Representative for Afghanistan, met with Marshal Abdul Rashid Dostum in Uzbekistan on Sunday night. The party said that the meeting took place in Tashkent to discuss peace talks, continued US assistance to Afghanistan, and in particular military forces.

During his visit to Uzbekistan, Khalilzad met with the Uzbek Foreign Minister and said that they had agreed that all parties should immediately support progress towards a comprehensive political solution that would end Afghanistan’s 40-year war.

In the consultative meetings with the Jigra leaders, the focus was on strengthening the national and political consensus as well as ensuring just and lasting peace while with Khalilzad, the president called on the United Nations to adapt its vision for the peace process to new realities and a new chapter in relations.