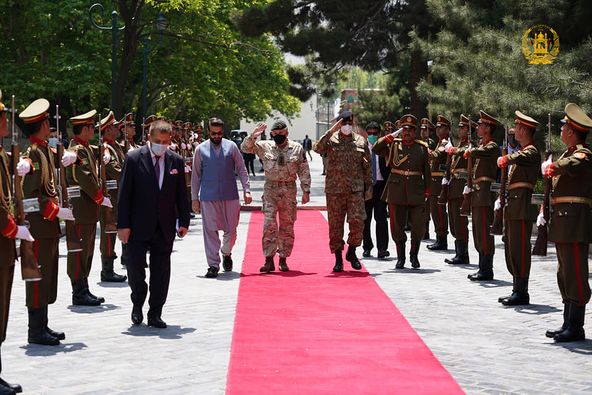 Kabul: With the withdrawal of international troops already underway in full swing and an Eid ceasefire round the corner, regional players are taking this opportunity to accelerate the Afghan peace process. In line with this, Pakistan Chief of Army Staff (COAS) General Qamar Javed Bajwa on Monday assured Pakistan’s full support to Afghan-led and Afghan-owned peace process during his day-long visit to Afghanistan.

“The Pakistan COAS reiterated that a peaceful Afghanistan means a peaceful region in general and a peaceful Pakistan in particular,” according to the statement.

President Ghani insisted that the role of regional countries and particularly Pakistan, in the establishment of peace and influencing the Taliban is very important. “Both neighboring countries have no other option, but to show respect to each other, maintain good neighborhood and boost economic cooperation,” a statement from the Presidential Palace quoted Ghani as saying. He added that there is no military solution to the Afghan conflict.

Meanwhile, Dr Abdullah said, “Agreeing that there is no military solution to the Afghan crisis, we stressed on the restart of meaningful talks between the GoIRA (government of the Islamic Republic of Afghanistan) & Taliban by aiming for an inclusive & comprehensive political settlement.”

Abdullah said Gen Bajwa assured that Pakistan supports an inclusive power-sharing arrangement and elections as a right of Afghans to self-determination. “I pointed out that the Taliban have yet to fully use this unique opportunity for talks and peace. Any attempt to use force will worsen the stalemate and shore up public opposition,” Abdullah said.

The HCNR statement further stressed that a peaceful Afghanistan, of which the Taliban are a part, is in the interest of our people, the countries of the region and the world.

Meanwhile, Pakistan on Monday welcomed the three-day ceasefire announced by Taliban and the Afghan government in Afghanistan.

However, amid the surge in violence in Afghanistan in recent weeks, US Special Representative Zalmay Khalilzad on Tuesday too welcomed the announcements by the Taliban and the Afghan government to uphold a ceasefire, but emphasized that Afghans deserve a political settlement and a permanent ceasefire.

Kabul witnessed a deadly bombing outside a school on Saturday which claimed the lives of over 68 students. Adding that the violence has been extreme and Afghans have paid the price, Khalilzad said, “Afghans deserve much more: a political settlement and a permanent ceasefire. We, therefore, urge accelerated negotiations among Afghans on a political settlement and an end to this senseless war. This is what the Afghan people yearn for. The United States stands with them.”

The US too welcomed the ceasefire, but urged the Taliban to agree to a more long-term truce. “We welcome the ceasefire and any move that allows the Afghan people a reprieve from violence,” State Department Spokesman Ned Price said during a news conference in Washington, DC on Monday.

“We urge the Taliban to extend this ceasefire and order a significant reduction in violence,” Price said.

Amid the ongoing drawdown of US troops from Afghanistan, the war-torn country has seen a spike in the incidents of violence in recent weeks, leading to casualties of Afghan security forces and civilians. The Biden administration has said the US will maintain an embassy in Kabul and military capabilities to mount counterterrorism operations in Afghanistan even as US troops leave.

“We will have resources in the region and over-the-horizon capacity, should threats emerge,” Price said on Monday.