“We will never compromise the sacrifices of security forces and there will be no difference between good and bad terrorists and we will conduct peace talks with those who are eager to make peace,” Mohib began in his address.

NSA Mohib added that war should be managed and enemies should be put under pressure for peace talks, emphasising on a strategy. “Our definition from the enemy is very clear: anyone who seeks to damage this system is considered as enemy of the Afghan people,” he explained.

Hamdullah Mohib also addressed the issue of recent criticism and attacks on newly appointed acting Defense Minister Assadullah Khalid, “Attacks on Asadullah Khalid, indicate how enemies are afraid of him”. 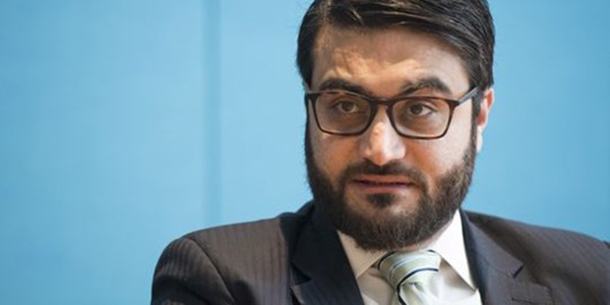 He also assured that peace is on the government’s priority.

Acting Defense minister Assadullah Khalid while addressing the event expressed his gratitude towards President Ghani for trusting him despite criticisms.

He continued “Our first priority is to maintain unity in army and to strengthen it”, and continued “We see the map of Loy-Afghanistan, all the tribes must contribute to defend Afghanistan”.

“Required measures will be implemented after a thorough assessment in the ministry,” Khalid said while adding that his priority will be to given to the moral of the forces and towards solving their problems,.

Expressing gratitude for the hard work of soldiers, Khalid said that “We are here because of our soldiers who are fighting against enemies throughout Afghanistan. He added how the topmost concern of Afghan Army is to maintain national unity among the soldiers.
Khalid also remarked that he is sure that the nation trusts him while assuring that the Defense ministry will serve the soldiers who are on the frontline.

“We will kill them and seize their headquarters”, Khalid affirmed while talking about the enemies and thereafter as he talked about the peace process, he said “We will only back a dignified and stable peace process”.

“After this, our slogan will be to kill the enemy and eliminate their strongholds. We must go after the enemies’ strongholds. I assure government that all security forces will support the peace process and if peace comes to Afghanistan, that will be because of security forces’ pressures,” Khalid said.

Admitting about the strangles of bureaucracy he said “No more bureaucracy, I want to see actions practically. Our elite forces will only be focused on offensive operations.”

Explaining about the strategy and security, he emphasised “Coordination is a main principle in the ministry and we will work more on this. I heard that in some areas our forces are busy as private guards. We will change this soon and our commando forces’ focus will be only on operations” and he also added that coordination is the key between various security sectors.

Promising to look after families martyrs, Khalid assured how this is a top priority for him. He added “Our job is not to protect ourselves but to protect people”.

Khalid conceded by assuring how they will do a much better job than the past, and said “Some people criticize me and say that Khaild could not save himself when he was in the NDS. Let me tell them that I was here to protect them not to protect myself, and I will continue to protect you again”.

Outgoing Defense Minister Tariq Shah Bahrami was the first one to address the event. He briefed about the reforms that were brought in the ministry under his administration and said that the process is ongoing.

He assured that significant work has been done to ensure transparency in this ministry and that new policies have been implemented in this respect. He talked about the new capacity of military to conduct night raids and showed his gratitude to NATO commander Gen Scott Miller for the latter’s support to Afghan army.