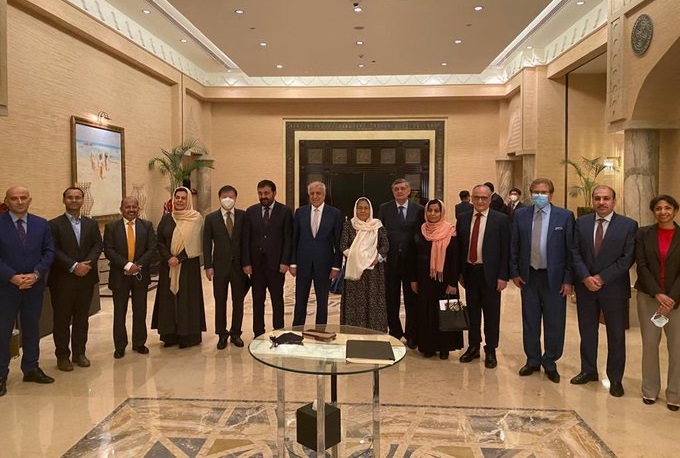 Kabul: In the first big step for the Afghan peace process in recent times, the members of the extended troika – US, China, Russia, Pakistan – met with representatives of the Afghanistan government and the Taliban in Doha, in the presence of host country Qatar, on Friday to discuss the peaceful settlement in Afghanistan and help the parties reach a permanent and comprehensive ceasefire.

The member nations in a joint statement reiterated that there is no military solution to Afghanistan and only an Afghan-led, Afghan-owned process is the answer to bring in lasting peace and stability. Taking note of the withdrawal of foreign troops from the war-ravaged country, the extended troika members said that both the warring factions should ensure that the drawdown is peaceful and the peace process is not be disrupted, no fights or turbulence should occur in Afghanistan.

“We expect the Taliban to fulfill its counterterrorism commitments, including preventing terrorist groups and individuals from using Afghan soil to threaten the security of any other country; not hosting these groups and preventing them from recruiting, training, and fundraising. We expect the Afghan government to continue counterterrorism cooperation with the international community,” the extended troika joint statement read.

Meanwhile, the Taliban too confirmed their presence at the extended troika meeting. The delegation of the Taliban was led by Abbas Stanekzai, Deputy-Head of the Political Office and the Negotiations Team. Suhail Shaheen, Member of Negotiations Team of the Taliban and Political Office spokesperson, said, “The participants discussed the current peace process and agreed, work on removal of black list and prize list start practically.”

The US President Joe Biden had announced on April 14, the plan to withdrawal all foreign troops from Afghanistan by September 11, ending the 20-year war. However, the Taliban had stated that the extension of the deadline from the May 1 was a violation of the Doha agreement and that the US should be ready to face the consequences. Such circumstances led to a deadlock in the peace process which was scheduled to get a boost during the Istanbul Summit. However, the Turkey conference has been postponed indefinitely due to this. Presently, the Afghan government has submitted its peace plan to the High Council for National Reconciliation (HCNR) and lately, the Taliban too has submitted its draft peace plan to the HCNR. Now, the negotiating parties need to be ready with a unified plan keeping the interests of both sides at hand and ensuring that any peace agreement includes protections for the rights of all Afghans, including women, men, children, victims of war, and minorities, and should respond to the strong desire of all Afghans for economic, social and political development including the rule of law.

Due to the deadlock, there was been increasing incidents of clashes and counter-clashes between the Afghan government and the Taliban, leading to deaths of civilians. Condemning the violence, the joint statement added, “All parties involved should reduce the level of violence in the country and the Taliban should not to pursue a Spring offensive. We condemn in the strongest terms any attacks deliberately targeting civilians in Afghanistan. We urge the Government of the Islamic Republic and the High Council for National Reconciliation to engage openly with their Taliban counterparts regarding a negotiated settlement. We do not support the establishment in Afghanistan of any government imposed by force.”