Hajji Din Mohammad, deputy chief of the High Peace Council, held a press conference on Tuesday to give details about the Moscow talks that took place on November 9. He clarified firstly, that the initial delay for holding the talks had been at the request of the Afghan people.

He also called on countries to stop confrontations in Afghanistan and instead “work for peace and to help facilitate talks with government and Taliban”. The deputy chief admitted that all countries at the Moscow meet agreed on the fact that the peace talks should be Afghan-led.
“They [countries and stakeholders] all supported the idea of an end to the war,” he said. 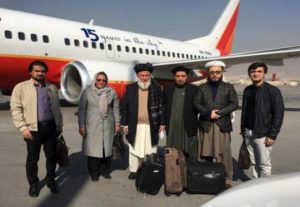 Adding further, the HPC deputy chief said that “Taliban demands including withdrawal of foreign troops could be discussed at the negotiating table.”

Pakistan also sent its delegation in official capacity at the meet, and Mr Mohammad pointed out that Pakistan had ‘soft stance’ at Moscow peace meeting. Another member of the High Peace Council said that they hope Pakistan’s move to release Taliban prisoners will have a positive impact on the peace process in Afghanistan.

There are two opinions floating about currently-one by Russia that believes US has failed in Russia, and the other about a supposed request by Washington to Afghan Government for postponement of Presidential elections on the grounds of wanting to negotiate with Taliban. To the latter, the deputy chief clarified that “any delay in presidential elections would need to be at the request of the people and government.” For the Russian comment, he said it was Moscow’s own opinion. “Zamir Kabulov’s remarks on Afghanistan echo those in Soviet-era. I told him that his stance should be constructive” added the head of High Peace Council delegation that attended Moscow peace meeting.

Another HPC member remarked at the press conference that Taliban showed ‘flexibility’ at meeting over talks with government, but their key precondition still remains to be withdrawal of foreign forces. The member expressed that such a decision would need to be decided on by the people of Afghanistan & national interests needs to be taken into account first.