First Lady Rula Ghani said that while Afghan women want peace, the progress they have made in the past 19 years should not be risked in the peace negotiations with the Taliban as the talks continue in Doha.

Once Afghan women “figured out [that] they were being sidelined by the Doha talks… they really have made their voices heard and protested very clearly,” Ghani said.

The progress Afghan women have made in the years since the fall of the Taliban could be at risk, she continued, if the Taliban are given too much power.

“Don’t get me wrong: Afghan women want peace,” she clarified.

“We all want peace. Who wouldn’t, after living for forty years in such a situation of insecurity and of violence at every corner? But we don’t want peace at any cost, and we have some very clear ideas of how we conceive that peace.”

Only four of the 42 negotiators representing the Afghans – the government and the Taliban – are women, but Ghani explained that these women “they are not just there for women’s issues, they are national actors.” 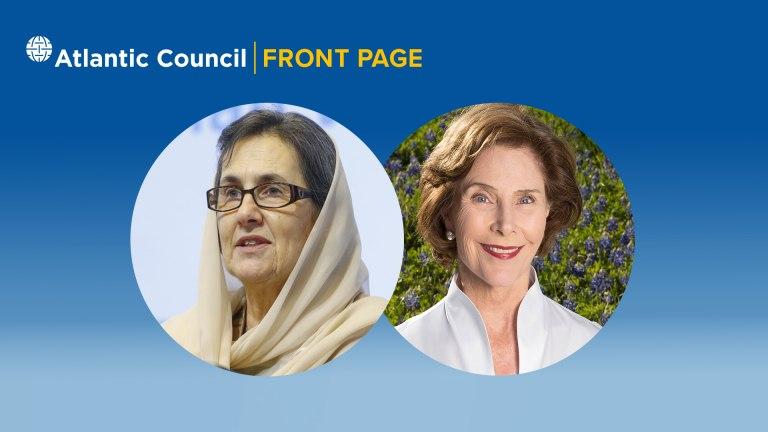 The women have proven to be “formidable interlocutors to the Taliban” she added, and “have really managed to rise from everyday issues and see the big picture,” she added.

Ghani made clear that the Taliban must be allowed back into Afghan society but, she suggested that the Taliban needs “to understand that if they want to come back and live in Afghanistan, they cannot impose their own brand of religion on the population.

Bush too warned that Afghanistan remains “a very fragile democracy” and the Taliban would take “obviously” would take over and have Afghanistan be a “failed country.”

She said she was “not happy about the idea” of the U.S. “negotiating with the Taliban,” as it risked saying that “they are more important [to the U.S.] than the elected government.”

After years of hard work, Afghan women have made “great, great strides,” Bush said, and are now “able to work and contribute to the economy, able to contribute to government.” She also expressed hope education for women is an important sign of progress.

She noted that more than half of the students at the American University in Kabul are female, including the latest valedictorian.

Bush argued that the United States and other allies “have a moral obligation really to continue to support the people of Afghanistan.”

While she understands the desire for peace and to bring U.S. troops home, a durable peace in Afghanistan “is in our moral interest…and in our security interest,” which requires the United States to “continue to try to send money to Afghanistan for the legitimate government and legitimate projects,” she concluded.