Russia in the United Nations General Assembly abstained to vote in favor of the recent UN resolution on Afghanistan’s situation.

The resolution is called “The Situation in Afghanistan”, and was approved in UNGA by 124 votes in favor and three abstentions from Libya, Russia and Zimbabwe.

The resolution which was adopted by the United Nations General Assembly on December 6, pledges towards continued support and aid to Afghanistan in rebuilding state, curtailing and ending terrorism and narcotics racket, and supporting the Afghan peace process.

Russia’s permanent representative in United Nations Vasily Nebenzya expressed in the draft resolution that Russia’s role in getting Taliban to negotiate, has been neglected and ignored by representatives of a several countries. 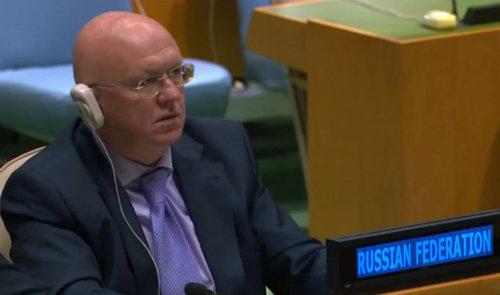 He also added that in the recent versions of the draft, Moscow’s suggestions or concerns and regional threats have been overlooked.
“We are disappointed by reluctance of a number of delegations to reflect the rule and outcomes of the Moscow format of consultations which is the important platform for launching focused negotiations to advance the national reconciliation process,” he said.

Afghanistan’s Permanent Representative to the United Nations, Mahmoud Saikal, expressed Kabul’s support for any effort that brings peace and stability in Afghanistan and he also pointed that that an issue with recently held Moscow Summit was that Russia did not even request travel permission for four Taliban representatives to visit Moscow. “While the Moscow meeting was a development, it occurred in a manner that contradicted the principle of transparency as four Taliban members out of five who traveled to Moscow, did so without a travel ban exemption from the United Nations Security Council Taliban sanctions’ committee,” he explained.