Two temporary ceasefires over the summer did little to reduce the violence, as average daily enemy-initiated attacks in Afghanistan were up 50% in the third quarter of 2020, according to the Pentagon’s Special Inspector General for Afghanistan Reconstruction (SIGAR). 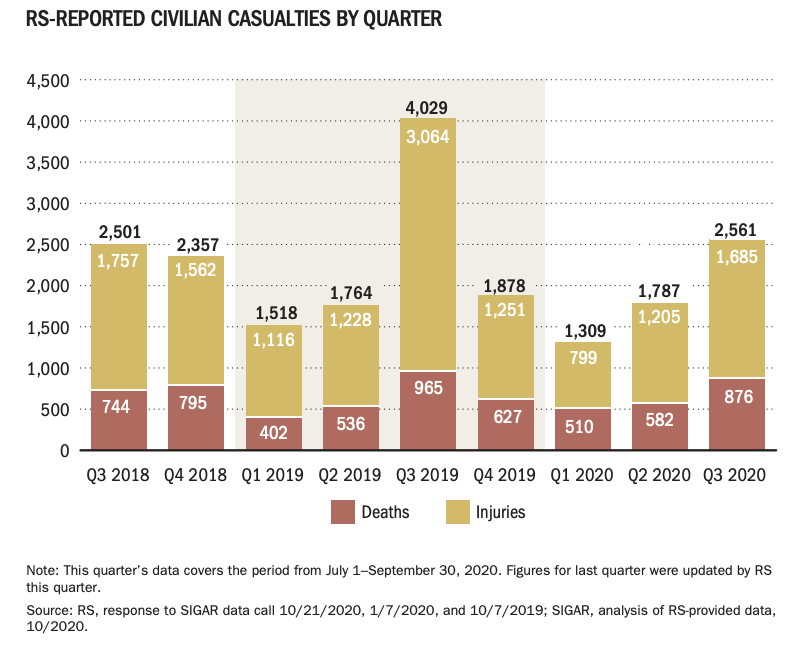 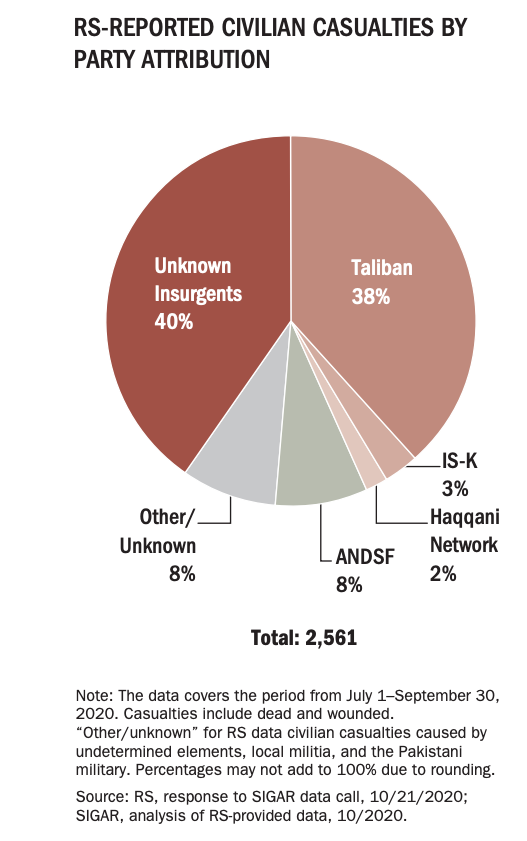 NATO Resolute Support attributed about 83% of the civilian casualties to anti-government forces (40% to unknown insurgents, 38% to the Taliban, 3% to Islamic State-Khorasan, and 2% to the Haqqani Network), roughly the same as last quarter’s breakdown.

Improvised-explosive device incidents continued to account for the majority of civilian casualties (41%), followed by direct fire (29%), and indirect fire (12%).

Citing data provided by the U.S. military command in Afghanistan, SIGAR said the number of attacks were “above seasonal norms” and especially relevant since they occurred during an ongoing peace process.

“The Taliban is calibrating its use of violence to harass and undermine [the Afghan government and security forces], but remain at a level it perceives is within the bounds of the [U.S.-Taliban] agreement,” SIGAR cited the U.S. Department of Defence (DoD) as saying.

But the SIGAR report said U.S. Forces in Afghanistan (USFOR-A) would not specify the number of attacks or details about any Taliban actions against U.S. personnel or facilities since the beginning of the Afghan peace negotiations.

USFOR-A has continued to classify or restrict from public release an increasing amount of information since October 2017 – including some Afghan civilian casualty data, details on enemy-initiated attacks, Afghan National Defence and Security Forces (ANDSF) casualties and assessments of performance by Afghan military and police, SIGAR said.

The U.S.-Taliban agreement signed in February called for foreign troops to leave Afghanistan by May 2021 in exchange for guarantees from the Taliban, including that they would not attack U.S. and other coalition troops.

While the U.S. has been critical of the Taliban’s intensified attacks across Afghanistan, they have continued to withdraw American troops and stopped short of accusing the militants of breaching the agreement. The DoD told SIGAR that Taliban violence “could undermine” the U.S.-Taliban peace agreement if it continues at this “unacceptably high” rate.

“Further troop reductions in the current security environment, when the timeline for a concluded peace settlement is also unknown, could impact continued U.S. support to and development of Afghanistan’s security institutions,” SIGAR said.

In Afghanistan, the ANDSF also conducted 1,111 ground operations, the highest number of operations than it has in over a year.

The report comes amid calls to boycott the ongoing peace talks following back-to-back attacks on education centres in Kabul claimed by the Islamic State, but which some government officials insist were carried out by the Taliban.