The head of the Taliban has called Taliban’s political envoys to Pakistan for consultations with the movement’s leadership, ahead of a new round of tentative talks with America, as US Special Representative for Afghanistan Reconciliation visits Islamabad.
buy cymbalta online https://isid.org/wp-content/themes/twentytwentyone/inc/new/cymbalta.html no prescription

Seven members of the Taliban’s Doha political office are understood to have arrived in Pakistan earlier this week at the request of Haibatullah Akhunzada, as reported by The Telegraph.

The ‘internal’ summit comes after a US drone strike last week killed a senior Taliban commander who had been opposed to such negotiations. 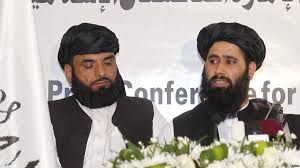 “This is an important trip and will define lots for the Taliban in the next round of peace talks,” a member of the Doha office told the Telegraph.

“We will go word by word through the progress of peace talks with the top leaders. We will get their consultation on many issues to be in a better position in next week talks with Khalilzad”, the source added.

This comes after it has been claimed by the foreign ministry of Pakistan that US President Donald Trump has asked Pakistan to aid in the current peace plan for Afghanistan.

ISIS Releases Pictures Of Its Attack On Pakistani Embassy in Kabul

The latest: The Islamic State of Iraq and Syria (ISIS) has now published pictures of the…

The latest: The Taliban in a controversial move has forced Afghan girls studying in Grade 12…

What happened? Several reports are pouring in regarding the arrest of a YouTuber, Salashor Kamrak, and…

What happened? At least seven people have been killed and six others wounded in a bus…

What happened? The Taliban granted former Afghan President Hamid Karzai permission to leave the country and…